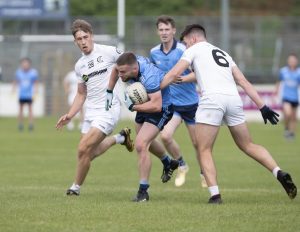 Padraig Tuohy (in sky blue) worked hard for Eadestown in their defeat by Carbury on Tuesday evening Photo: Sean Brilly

Points from Brian Simmons and Conor McCarthy quickly had Eadestown into the early advantage before the home side began to get to grips with the tie.

With Carbury now finding their range, a Cully brace followed by one from Stephen McKeon opened up a three point advantage. Looking to stem the tide Padraig Touhy pointed before a second Carbury trio took the advantage to five.

Determined to close the gap before the break, Bolton hit two from play before Aidan Cassidy’s fine strike left two separating the sides at the break.

Looking to re-establish their advantage from the throw in Cully and Brian O’Flaherty pointed before Eadestown could respond.

Raising the white flag once more, Bolton had the deficit to three before Cully and Cassidy traded efforts. The exchanges of scores continued through Bolton and Cully before Carbury again looked to build on their advantage with a further two points.

Responding, Bolton cut the flow of scores before a further exchange maintained the four point advantage for the home side.