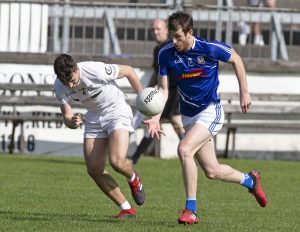 Paddy Brophy (right) scorer of 0-8 for Celbridge in their defeat of Castledermot on Tuesday night Photo: Sean Brilly

The hosts made an energetic start to the game and raced into an early lead thanks to scores from their talisman Emmet O’Keeffe, who notched 1-5 on the night. Celbridge weren’t as quick out of the traps but the excellent Paddy Brophy kept the scoreboard ticking over.

With the game locked at five points apiece, Castledermot had a breakthrough in the 17th minute. A long ball from goalkeeper Shane Nolan found the marauding corner back Billy O’Gorman deep in Celbridge territory.

O’Gorman bundled the ball onto O’Keeffe, and he did the rest, burying the ball into the bottom corner.

Mounting a comeback looked to be an even tougher task for Celbridge when Johnny Owens was given a black card in the 27th minute, but scores from Darragh Murphy and Kevin Flynn meant that they only trailed by one at half-time.

Celbridge put on an exhibition in the second half. Their inter-county experience was clear for all to see, and they certainly showed why they are hotly tipped to make a deep run in this year’s championship.

In the 38th minute, the brilliant Brophy picked out Darragh Murphy on the edge of the Castledermot square.

Murphy knocked it into the hands of Johnny Owens, who turned on a sixpence to make room for himself in a crowded penalty box. He then nonchalantly rolled it into the back of the Castledermot net, which gave Celbridge the lead for the first time.

Further scores from Brophy, Kevin O’Callaghan, Aaron Browne and substitute Liam O’Flynn put the finishing touches on what was a comfortable win for the visitors in the end.

While it may have been a slightly disappointing league campaign for Celbridge, they look like a frightening opponent for any team now that their county men are back.