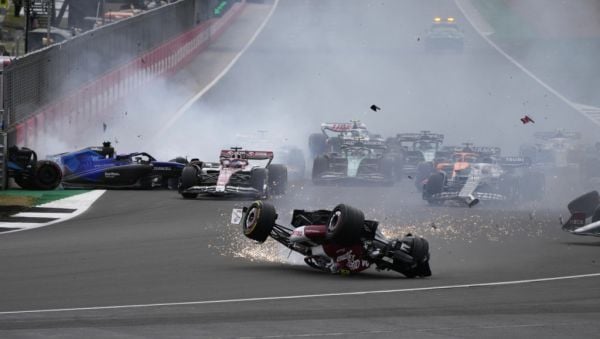 The British Grand Prix was red-flagged on the first lap after Zhou Guanyu’s Alfa Romeo was launched upside down.

Chinese rookie Zhou was removed from his car and taken away on a stretcher.

Mercedes’ George Russell and Williams’ Alex Albon were also caught up in the alarming accident at Silverstone.

Following an incident at the start of the race Alex Albon and Zhou Guanyu have been taken to the medical centre. Both drivers are conscious and continue to be evaluated.

Further updates will be given in due course. pic.twitter.com/mUenaHpTYO

Russell was quickly out of his car after the incident.

A spokesperson for Formula One’s governing body said: “The FIA advises that following the start of the race, emergency crews were immediately in attendance and the drivers of car 23 (Albon) and car 24 (Zhou) have been taken to the medical centre.

“Both drivers were conscious and will be evaluated at the medical centre. Further updates will be given in due course.”

The FIA added: “We also confirm that after the red flag, several people attempted to enter the track. These people were immediately removed and the matter is now being dealt with by the local authorities.”