A tribute in our Daletta Column in this week’s Kildare Nationalist, out now, to the renowned trainer, Kevin Prendergast to mark his 90th birthday this week.

WHILE his family is always associated with Geraldine, Athy, Kevin’s lineage lies further west, as Professor MacLysaght revealed in his Surnames of Ireland. ‘PRENDERGAST de Priondragás. One of the powerful families which came to Ireland at the time of the Anglo-Norman invasion. They are still found mainly in the places of their original settlement [Mayo]. 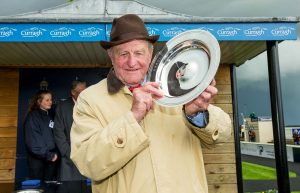 The legendary horse trainer, Kevin Prendergast, celebrating one of his many wins Photo: INPHO/Morgan Treacy

Some of those in Mayo assumed the name Fitzmaurice.’ The Dictionary of Irish Biography singled out just four Prendergasts. Sir Thomas (c.1660-1709) is described as an army officer and conspirator against King William, briefly part of a plan to assassinate the king. His betrayal of the cause led to the execution of eight of his former colleagues. He met his end at the Battle of Malplaquet.

His son and namesake, Sir Thomas, 2nd Baronet of Gort (1702-1760) was a politician, landowner, governor of County Galway, Irish postmaster general and senior warden of the Grand Lodge of Ireland (freemasons). John Patrick Prendergast (1808-1894) was a barrister, land agent and historian.

That brings us to Patrick Joseph ‘P.J.’ (d.1980). ‘Little is known of his early life except that he worked in stables in Australia in 1932 and returned to Ireland by 1935. . . A well-built man, he became too heavy for flat racing and turned to steeplechases in England. He broke his neck in a bad fall and brought his family back to Ireland in 1939. Returning to Liverpool to volunteer for the RAF, he was arrested and deported on the mistaken assumption that he was a member of the IRA. Taking a trainer’s licence on the Curragh in 1940, he stabled his first two horses, Spratstown and Rare Rajah, at Michael Connolly’s yard and was a familiar figure cycling to work with horsefeed in the basket of his bicycle.’

From such unpromising origins did P J ‘Darkie’ Prendergast become the first Irish-based trainer ever to head the British flat trainers’ table, as he did from 1963 to 1965. Kevin, the eldest of Darkie’s four children, had been born in Caulfield, Australia on 5 July 1932. Only ten when his parents separated, Kevin and his brother ‘Long Paddy’ were reared by their Prendergast grandfather, while their sisters Eileen and Beryl were brought up by their mother.

‘Long Paddy’ paid tribute. “My grandfather, who was Paddy as well, was as good a judge as there ever was of a horse. He was a dealer. I remember one evening he came home with 22 donkeys from Castledermot and he had a market for them in Manchester – 22 asses and we up all night. They were running into ditches, running up and down the road and only Kevin and myself in our bare feet trying to manage the fxxxxrs!”

Educated in Newbridge College until expelled, Kevin completed his education in Rockwell College, Cashel, where he played hooker on Rockwell’s Munster Schools’ Cup winning team. In 1949 Kevin returned to the land of his birth, serving four years as head lad to leading trainer Frank Dalton in Randwick, Sydney. Kevin spent a further six years as assistant to his father in his ever-expanding Rossmore Lodge stable, taking time off on 15 February 1957 to marry Lesley, daughter of Frank Daly, Skibbereen, Co Cork.

That year he took out an amateur rider’s licence, riding winners, notably for Paddy Mullins. ‘Darkie’ volubly disapproved of his elder son and heir risking his neck on mounts for a then unknown backwoodsman. Taking out his own trainer’s licence in 1963, Kevin opened his account when riding M J Sheehan’s Zara to victory in the Phoenix Park in March, following up at Leopardstown in May. Green Eyes, one of Kevin’s early winners, was owned by American Mrs M E Whitney Tippett, one of the stalwarts of his Erindale, Curragh stable for many years. Assistant trainers included Jimmy Lenehan junior, Jimmy Mescall and Stephen Craine.

A model of consistency down the decades, Kevin Prendergast trained his 2,000th winner in November 2010 and shows no signs of stopping, despite the loss of Lesley, mother of their eight daughters, in January 2020. He is also renowned for a sequence of successful graduates from Erindale’s apprentice ranks, notably Pat Black, Gabriel Curran, Declan Gillespie, Kieren Fallon, Charlie Swan and Chris Hayes. Sir Mark Prescott, doyen of Newmarket trainers, insists that his retirement will be involuntary, caused solely by his owners transferring their patronage to younger practitioners. Meanwhile, P/A Eva White, housekeeper Eileen Fields and Kevin’s daughter Andrea prepare Erindale for that milestone birthday celebration. We join in wishing Kevin Prendergast the very best.

The Daletta Column appears in the Kildare Nationalist each Tuesday.