KILDANGAN prevailed over Ardclough on Tuesday evening in Hawkfield in what was the final game of Round 1 of the Tom Cross Transport Junior Football Championship. 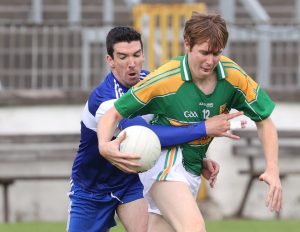 Dermot Hickey (No 12) was on the score sheet for Kildangan in their defeat of Ardclough in the Tom Cross Transport JFC on Tuesday night Photo: Sean Brilly

Both sides came into this one off the back of underwhelming league campaigns, managing just two wins between them. However, both sides seemed to put their poor form aside as they served up an entertaining game for the neutral.

Ardclough settled the quickest and managed to put early scores on the board from Fionn Carr, Jamie Clyne and Liam Hanley. Kildangan weren’t long responding though and raised white flags of their own through Stephen Quigley and Danial Gilbert.

The turning point in the game came 11 minutes in courtesy of Kildangan’s Mark O’Donovan. After receiving a handpass from Damien Broughal on the right-hand side of the field, O’Donovan burned Tristan McGarr with his pace and found himself one-on-one with the keeper.

O’Donovan’s left-footed effort found it’s way in off the inside of the near post. It was a lethal finish from a classy operator.

From the subsequent kickout, O’Donovan found the back of the net again. He intercepted a wayward short kickout from Ardclough keeper Brian Mullen and rolled the ball into the empty net.

In a crazy sequence, Kildangan went from two points down to four points up in less than a minute.

Ardclough managed to recover from this blow relatively well, and they went on to outscore Kildangan 5-3 for the rest of the first half. Scores from Cillian Burke, Mark Byrne, Fionn Carr, Liam Hanley and Jamie Clyne lessened the deficit to just two at the break.

Straight from the throw in, Kildangan’s Joseph Walsh managed to split the posts, and that set the tone for how the second half would go.

Another two scores followed Walsh’s in quick succession, and it wouldn’t be long before they raised another green flag.

Danial Gilbert started the move by finding substitute Alan Donoher on the wing. In a sweeping move, Donoher picked out Conor Corrigan who then flicked it back to Gilbert.

In acres of space, Gilbert had time to pick his spot in the top left corner to further strengthen his team’s grip on the lead.

By the 43rd minute, Kildangan had stretched this lead to twelve. Four minutes later, they notched their fourth and final goal of the evening.

Once again, poor Ardclough defending left Kildangan with an abundance of space in the final third. Once again Donoher was involved, this time laying it off to Oisin Irvin. Irvin kicked it across the box to Joseph Walsh, who rolled the ball with conviction into the far bottom corner.

Ardclough were gifted a consolation goal when referee Thomas Smyth pointed to the penalty spot for a foot block three minutes from time.

Substitute Matthew Stapleton stepped up and sent Kildangan keeper Sean Fitzgerald the wrong way, but it was too little, too late.

The final whistle sounded shortly afterwards, and Kildangan were worthy winners. Kildangan have a tough championship year ahead of them, but this was certainly a great start.