THE SCIENCE OF THE GAME – THE SUPPORTER

The Supporter Column in this week’s Kildare Nationalist, out now, looks at Strength and Conditioning and Athletic Development in modern Gaelic Games.

“I don’t know whether there’s a strength and conditioning gap or athleticism gap but there was a gap in the outcome of today and I don’t believe that’s reflective of this team. A lot of people were saying lads were very well conditioned and we were very happy with the work we got done over the last number of months. We’ll look at the good work we did and look to build on it and make it better. If there’s any deficiencies in any part of our game, we’ll try and improve them.” – Glenn Ryan, 28 May 2022. 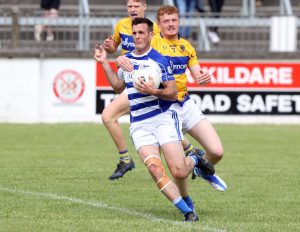 The Kildare manager may not have been willing to admit to any gap in athleticism between his team and their tormentors in the Leinster Final, and that’s understandable, but to most supporters the difference in conditioning must have been obvious.

From the opening minutes Kildare players were gasping for breath in flailing attempts to deal with blue waves washing over them. Of course, the terms “Strength and Conditioning” and “Athletic Development” are cover-all phrases that tend to be misunderstood. It is not necessarily about how fast a player runs or how big they have developed their upper bodies.

A succinct and fascinating article in the Irish Independent last week by former Sligo footballer Neil Ewing brilliantly put the science into simple lay-person’s terms, describing how any deficit in conditioning manifests itself on the field, particularly in the latter stages of a game. An example he gives in relation to scoring talks about the shot that drops short late on, arguing that the team with the “greater repeat sprint ability doesn’t take that shot. There is a team-mate appearing off the shoulder, unmarked, to pop over an easy shot.” Kildare’s score to shot ratio was under 60% in 2022. Not good enough.

Other examples include tackling. Most inter-county players can execute the basics of a tackle perfectly in training, so the skill level is there. And “make them do it ten times on a Sunday against an opponent who is fitter and faster, and they will executive it nine times to turn the opponent back.” But “the one time they don’t? Overlap. Goal.” Kick-outs also come under Ewing’s radar as he highlights the reducing number of players willing and able to make themselves available as the game drifts towards its dying embers.

“Kick-out number one and every team has eight to ten lads making themselves an option… kick-out fifteen and the team showing greater fatigue are probably down to four or five capable of involving themselves.” Ewing provides further examples, such as the number of teams who can live with the elite teams for fifty minutes but then fade away. How often has this been the case for Lilywhite teams against the Dublins of this world. The Armagh and Mayo league defeats are other recent examples.

One you wouldn’t think of: talking. “Listen to teams of similar athletic ability play and the decibel levels will match for 70 minutes… the communication becomes less clear when you are exhausted from tracking faster opposition.” Anyone who has played the game at any level will recognise these phenomena, will understand the difference in their own game and their team’s when players are fit and well-conditioned.

Interestingly, Ewing believes that a levelling-off of facilities and availability and quality of strength and conditioning across the 32 counties, would in turn see a levelling-off of performances across all teams. He likens player development to baking a cake, arguing that “every player has to have access to the right ingredients (facilities), at the right temperature (coach knowledge) and crucially for those outside the elite, the right amount of time in the oven.” The latter is an interesting point and refers to the need to keep squad turnover to a minimum and ensuring that a quality long-term athlete development plan is in place.

Regarding the latter point, I see that our neighbours in Laois have seen that particular light and are joining the raft of counties appointing a “Head of Athletic Development”, someone with responsibility for “the development and execution of an athletic development plan up to and including the senior intercounty teams.” Kildare, on the other hand, seem to this supporter to be dragging their feet in this regard, despite far superior financial resources.

The Strategic Plan Update publicised eight months ago identified the need to appoint a full-time S&C coach to oversee all county teams, with, crucially, a Player Development pathway post Minor to Under 23 that would include “Technical and Tactical Development, Athletic Development and Psychological Development”. The timeline at the time was unfortunately “TBC”, an Irish cousin of the Spanish mañana.

With the Board running a surplus again this year according to the June meeting and the St Conleth’s Park development put on the long finger, it would surely make sense to put some money behind a full-time professional in such a role? Time is clearly of the essence when you are playing catch-up. Has the role even been advertised?

As the Laois advert alludes to, players should be targeted to come under such a person’s supervision as soon as they come out of the county minor panel. Otherwise, they are only getting club-level S&C guidance until they join up with the under-20 panel. Similarly, when they are finished with under-20 there should be a further programme of development for those earmarked as potential senior stars.

On the club scene, the Senior A Hurling Championship Preliminary Rounds these last two weeks have thrown up a highly interesting round robin stage to come with Naas, Coill Dubh, Clane and Maynooth forming the Winners’ group (from which three teams will emerge into the knockouts). The Losers’ section is just as intriguing with Celbridge, Ardclough, Confey and Leixlip smarting from their preliminary defeats. That means three of the four semi-finalists from last year will be in the Losers’ section, fighting for two knock-out spots as well as their Senior A status with the bottom team of those four automatically relegated this year.

The quality on show in the Senior Football League games in Newbridge on Sunday was relatively poor, particularly in the first two games, but you could only stand back and admire the depth in the Naas playing resources, while Athy seem to have got their act together defensively after conceding far too many goals in their title defence last year. An interesting final awaits next weekend before the real stuff starts the following week.

The Supporter column appears in the Kildare Nationalist each Tuesday.