TWO second half goals from Edwina Birchall and Ava Cullen were enough to secure victory for the Lilywhites in the Leinster LGFA Minor ‘A’ final in Kinnegad on Wednesday night. A surge of late Meath pressure was not enough to trouble the resolute Kildare defence who dealt with the Meath attack calmly and effectively. 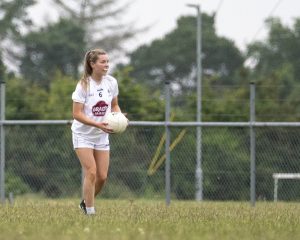 Kildare’s centre half back, Ruth Sargent, was Player of the Match in Wednesday night’s Leinster LGFA Minor “A” Championship Final Photo: Aisling Hyland

Kildare played with the breeze in the first half and they took some time to make effective use of it as Meath were applying serious pressure in the opening quarter of the game. Kildare levelled in the 16th minute with a score from Sophie Ngai that hit the cross bar and went over. Kildare then took control of the game and Niamh Farrelly scored three frees in a row to see the Lilies leading at half time by three points.

Kildare’s first goal came three minutes into the second half. Ava Cullen’s shot was parried away to Edwina Birchall who made no mistake and put the ball past the Meath defence and into the net. The Meath management made a flurry of changes to try and deal with the Kildare attack that was coming through in waves. Kildare responded to this with a goal from Ava Cullen, who evaded her marker to slot the ball home into an empty net.

A smattering of sin bins and a late rally from Meath would not be enough to deny Kildare their victory and they ran out convincing winners on the night.