KILDARE, managed by Leixlip’s Pat Travers, are LGFA U16 B All Ireland champions as they defeated Tipperary in the final in Crettyard on Wednesday evening with the Lilywhites winning on a scoreline of  3-11 to 1-8. 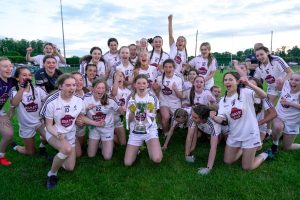 The Kildare team celebrates following victory in the LGFA U16 All Ireland Final on Wednesday night          Photo: Aisling Hyland

After a tight first half in which Kildare played against the wind the sides turned over with Tipperary leading 0-7 to 0-4. Ciara O’Hora was prominent on the score sheet for Tipp while Kildare’s responses coming from Tara Rafferty.

Goals were the order of the day for Kildare in the second half as they scored three in all. The Lilywhites started the second half in a positive fashion and had reduced the deficit to a single point when they struck for their first goal when Tara Rafferty’s shot hit the upright and ended in the Tipp net to give them the lead for the first time in the game at 1-6 to 0-7.

Midfielder Beibhinn Higgins put three between them with a superb point in the 37th minute but Ciara Shelly brought the sides level with a cracking goal four minutes later and the game was in the balance again with 19 minutes left.

Aoife Murnane then took control for Kildare  scoring 2-1 in the final eight minutes as Tipperary only added a point. Kildare even had the luxury of having a late penalty saved before emerging as nine point victors and All Ireland U16B champions.