IN this week’s Kildare Nationalist, in your shops now or on line at www.kildare-nationalist.ie, The Supporter casts a critical eye over the Preliminary Round games in the Joe Mallon Motors SFC and gives predictions on the likely outcome of the games.

CAN you keep a secret?

More of that later, but firstly, I once heard of a husband and wife who were married for fifty happy years. They shared everything and never kept secrets, except for one. The lady kept a shoebox which she kept hidden from the husband. However, the old lady got sick and lost hope of recovering, and felt bad about keeping the box a secret, so she asked the husband to bring it and open it. The husband opened the box and found two crocheted dolls and a stack of euro notes which came to nearly €100,000. 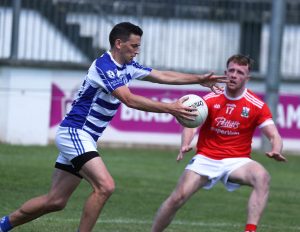 Action from the EMS Copiers SFL Division 1 Final between Naas and Athy last weekend. Both teams will fancy their chances in the Preliminary Round of the Joe Mallon Motors SFC this weekend Photo: Sean Brilly

He asked her about the contents and his wife told him that her grandmother had advised her that the secret of a happy life was to avoid arguments. So, every time she was angry with her husband, she crocheted a doll to calm herself down. The old man was relieved that there were only two dolls but was curious about all the money. “Where did it come from?” he asked her. “Oh”, she smiled, and added, “that’s the money I made from selling the other dolls.”

Anyway, back to our secret. I heard through the grapevine that the senior and intermediate football championships are throwing in this weekend. You may have missed the big promotional drive for it. It seems such a shame for the blue riband club competitions to throw-in on a Friday night. Talk about hiding your light under a bushel!

A bigger shame that nine senior, intermediate and junior games are taking place at nine separate venues that night, including the opening three senior games. That must make it next to impossible for local media to cover all games and supporters have to pick and choose. You would have to have sympathy for the County Board on this one, though, as the situation arises due to the All-Ireland hurling final taking place on Sunday, a day when no local games are traditionally played. When is a split season not a split season you may ask?

When you look at situations like that and the mass exodus of players from counties such as Mayo and Armagh to the United States, you’d wonder would it perhaps make sense to get the club season done and dusted first in the year, maybe from January to June, and then have the inter-county run off after that. Anyway, I’m going to put my head on the block and cast my eyes over the weekend’s senior preliminary round games.

In truth, the draw was a little disappointing, given that it was “open”, with the big guns generally avoiding each other, with one exception. Let’s talk about that one first: Naas v Moorefield is the game of the weekend and the county champions have been showing off a little, quite frankly, in the senior league over the last few months. The riches at their disposal are the envy of every other club and they seem to be able to throw in three or four different players every week. I saw them on Sunday against Athy in the Final and you’d be a brave person to back against them going the whole way again. Moorefield drew the short straw in the preliminary draw, but there’s been something of a re-awakening in Pollardstown this spring with a young team doing well in the league, comfortably holding onto their Division 1 status and coming close to a semi-final spot. I can’t see Moorefield winning this one but maybe a run through the calmer waters of a Losers’ group might suit?

Athy, Sarsfields and Celbridge will feel they can topple Naas, although the latter have had so many chances in recent years you wouldn’t be rushing out to the bookies. Davy Burke’s return to the helm at Sarsfields should see them organised and strong and they’ll surely account for Clogherinkoe at the weekend. Sarsfields without Ben McCormack, as they were against Athy in the league semi-final, are like Dublin without Con O’Callaghan. Sash were toothless up front that day with only Barry Coffey troubling the scoreboard to any extent. Clogherinkoe may struggle with second season syndrome, relying as they do so heavily on the mercurial talents of Jack Robinson, but they showed plenty of fight last year and if they can replicate that they may avoid the trap door.

Celbridge play Kilcock in a local derby on Friday night and while they struggled at times in the league, they’ll have far too much for the Intermediate champions you’d imagine, now that their inter-county players are back in harness. Athy versus Carbury is another game that looks clearcut enough, the former having reached the League final and putting up a decent challenge to Naas while the latter made the drop into Division 2 and will miss the exiled Eoghan O’Flaherty.

What to make of Johnstownbridge? They eased back into Division 1 with promotion from the second tier but were pretty abject against Leixlip in the second half of the final. Eadestown have been a hardy enough bunch in recent years and this could be one of the closest games of the weekend, on Friday night in Hawkfield. The Bridge might just edge it.

On Saturday, Raheens will surely beat St Laurence’s, who might be one of those struggling to stay in the senior tier in a few weeks’ time. Raheens reached the semi-finals of the league but suffered heavy defeats to Moorefield and Naas in their last two games. They should get back on track against a Larries side who still rely heavily on Podge Fogarty to get the majority of their scores. Maynooth v Round Towers could be another close-run game.

It will be interesting to see how Towers get on without Glenn Ryan at the helm while Maynooth put in some excellent performances last season. Will Mark Donnellan play in goal? Unlikely it seems. Maynooth to win. The final game sees Clane play Confey in Celbridge on Saturday evening, though early enough to get home in time for Up For The Match, mar dhea. You’d imagine Clane will have too much for Confey, as they did in the hurling preliminaries. Let the games begin. It can be our secret.