OUR Athletics Report below which appears in this week’s Kildare Nationalist which is available in your shops now or on line at www.kildare-nationalist.ie

ACROSS the world athletes are flying from their home base to Oregon in advance of the World Track and Field championships this Friday. Teams have been selected, some with controversy, others with ease. 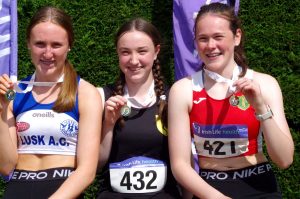 The Irish team has already been named with the inclusion of two shot putters John Kelly and Eric Favors – at the bequest of World Athletics. This has caused some controversy at home as these athletes have not met the B standard nor made the world ranking lists. Whereas athletes like race walker Kate Veale and 1500m track star Luke McCann have.

Back at home there has been another action-packed weekend of athletics with Day 2 and 3 of the National Juvenile Championships taking place in Tullamore. An overcast Saturday was followed by a sweltering Sunday where athletes struggled to stay cool in their warmup! There were 18 medals in total won by Kildare athletes; four gold, seven silver and seven bronze medals. And beyond the medal tally some amazing performances too, with plenty of personal bests and first-time national appearances. There were medals won across many of the walking, running, jumping and throwing events.

Lara Prendergast (Suncroft) has done it again. This girl has a string of Javelin successes in the past year. Back at the end of the season in 2021, she was selected to represent Ireland in the SIAB schools International. She has just a week ago been selected for the SIAB’s a second time. And now at the All-Irelands U18, she produced another Javelin win. In 2021 she finished 2nd with a throw of 36.88. Fast forward one year and she has broken the 40m barrier. She won the U18 All-Ireland Javelin with a throw of 42.95. This was not only a new PB but put her 3.50m ahead of last year’s winner and long-time rival Ellie McCurdy of Lifford/Strabane. Lara fouled her first throw, but her second throw put her in second place behind McCurdy. It was her third-round throw that produced the lead (and the gold medal) – a throw which McCurdy never could reach. Staying with the Javelin, the girls U15 was a spectacular event for Kildare. The county managed not one but two medals. The winner was Isobel Kearns (Naas) with Leah Murray (Kildare AC) in third. This was the exact same positions that the two girls achieved last year. Isobel won with a throw of 34.39m which came from her 5th round throw. Her lead was undisputed from her first round throw of 33.88. Murray threw 31.83 and like Kearns this came from her 5th round. This moved her up a notch from 4th to 3rd, edging out Eimear Ryan (Doneen AC). This bronze medal was Leah’s second medal of the weekend. On Saturday she had a great win in the Shot Putt. She threw 11.00 on her second round throw to move from 5th place into the top spot. Even her 3rd round throw of 10.99 was good enough to take gold. Leah’s gold medal winning performance not only eclipses her silver from last year but sees a 45cm improvement in distance. The fourth gold medal of the weekend came from Aidan Entriaglo-Bayon (Celbridge) who finished 1st in the Boys U17 Walk. Aidan is no stranger to victories in the walk. As Leinster champion for the last two years he is also the reigning All-Ireland champion. This year he improved his 3000m walk time to 15.04 from 16.58 last year. At close to two minutes that is a substantial improvement for Aidan.

Seven silver medals is a nice tally for the county and it was distributed across x number of clubs with Éire Óg Corra Choill AC getting a look in too. Éire Óg Corra Choill AC is but a small club and it is great to see one of their representatives make the medal table. Peter Casey finished 2nd in the U19 Triple Jump with a leap of 12.30m. Four of out of six of his jumps surpassed the 12m barrier. Crookstown-Millview secured five medals over the weekend with their leading athlete, Holly Wright, getting another silver to add to her discus one from the previous weekend. The 2021 Athletics Ireland athlete of the year finished runner-up in shot, throwing 12.48 in round 5. On Sunday her sister Cara also secured a silver medal with a throw of 29.34 in the girls U16 Discus. There were cheers of jubilation from the Crookstown-Millview supporters as the measurements were read from round three. This put Cara into the lead. She retained that lead until the final round until Rebecca Walsh of KCK in Waterford threw 30.13. The top three athletes also had new personal bests. Crookstown had yet more silverware as their strong team of Boys U18 Javelin throwers took to the field. The pair of Paddy Taylor and Conor Walsh are both 50+ throwers, placing them at the elite level in the country. They were however up against Oisin Joyce who recently represented Ireland at the u18 European Championships in Jerusalem. With a PB of close to 70m surpassing the Lake District athlete was going to be a tall order. Paddy threw a best of 55.95 with all his throws above 50m and Conor threw 53.29 with four of his throws above 50m. There was a new championship best performance set in this event by Joyce. Alex Heeney (Clane) could not have represented delight more appropriately as he somersaulted on the High Jump landing mat after clearing 1.80m in the Boys U16 High Jump. The Clane AC athlete was yet again up against the brilliant Michael Kent of Wexford, the same athlete who beat Heeney in the Leinsters recently. A slip by Kent at 1.75cm meant that Heeney and Kent shared the lead. Both athletes cleared 1.80m with Heeny almost making the 1.85m – so tantalisingly close too. The bar shook and then looked like it was going to stay in place, only to ultimately fall. Heeney has been un superb form this season and has worked hard with coach, Cera Nolan who herself was a jumps and hurdles national medal winner in her Juvenile years. David Oghubvu (Naas) was in form for the weekend with a silver in the 100m and a bronze in the 200m. Oghubvu clocked 11.17 in the final of the 100m and went out the following day to run 22.19 in the 200m. Both were great performances for the Naas AC athlete who has been a regular podium finisher. Michelle Cashman (Naas) was once again in top form in the high jump as she cleared 1.66 to finish second to Laura Fawley (Emerald AC). This is Cashman’s final year of juvenile athletics, and we look forward to seeing her enter the junior and senior ranks with further success.

With seven bronze medals also achieved, Kildare can be happy with its tally of 18 medals. Spare a moment too for all those 4th placings, athletes who perhaps on another day might get into the medal position. It is a hard position to be in but the 4th placed athlete of today can often be the future star of tomorrow. So fear not – your day will dawn. For some of the athletes there is the junior nationals this coming weekend. For more there will be the SIAB international weekend after next.

THERE was more international action for Kildare athletes across Europe last week. In Belgium on Saturday last, the Flemish city of Kortrijk played host in a European permit international meet. Ciaran Connolly (Le Cheile) competed in the High Jump. Ciaran cleared 2.04 on his second attempt and finished in 8th position. He made a really good effort on his final attempt at 2.08 but clipped the bar with his heal on the way down. 2.04cm is a little below his best but he is bouncing back from injury and should be happy with his performance. It is a wonderful opportunity for the 21 year old to mingle with the senior athletes on the international stage. Closer to home Eoin Richards (St Coco’s) competed in the open 3km at the Cork City Sports. He finished in 17th place. The race was won by Oisin Spillane of Tralee Harriers. There was great excitement in the International event as Darragh McIlhenney (Ireland) clocked 7.44 to beat favourite Emile Caress (GB) by 4 seconds.

The Week Ahead With the World Championships dominating the coming week, athletics enthusiasts will be keeping strange hours, staying up late or getting up early to catch a glimpse of the elite in action at Hayward field. Meanwhile back home there is still plenty of action to focus on. The National Juvenile relays and the All-Ireland B Championships will take place on 16 July. This will be he held as usual in Tullamore. The Junior and U23 All Irelands will also take place in Tullamore this year, as Santry is being resurfaced. There should be plenty of local talent on show, with many exciting competitions to witness.