KILDARE LGFA Minor Manager, Darren Kendrick, and his Management Team have made two changes in personnel and a number of positional switches from the team that started the Leinster Final for Wednesday’s ZuCar LGFA All Ireland Minor “A” Semi Final against Galway in Kinnegad, throw in 7.30pm. 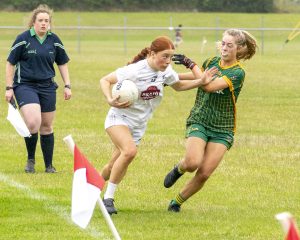 Grace Murtagh is sure to be a threat for Kildare in the ZuCar LGFA Minor “A” semi-final against Galway in Kinnegad on Wednesday evening Photo: Aisling Hyland

Into the team come Molly O’Loughlin and Hannah Breen, both of whom were used substitutes in the Leinster Final, 2-6 to 0-8, win over Meath two weeks ago. Niamh Farrelly, who scored 0-3 against Meath, and Siofra Galvin, unfortunately miss the game because of holidays.

Kildare’s victory in the Leinster final was built on two second half goals from Birchall and Cullen while goals were also instrumental in their hard fought victory over Dublin in the last game of their Group in Leinster.

For Wednesday’s game Kildare will be faced by former senior Manager, Daniel Moynihan, who is the Manager of the Galway team. The Tribes Ladies beat Mayo in the Connacht Final back in May on a scoreline of 2-7 to 0-7 with the goals coming in the first half from Niamh Divilly and Marta Banek. Sarah Duffy scored 0-4 in that final, 0-3 of which was from frees.

The fact that Kildare have played so recently and are familiar with the Kinnegad pitch should be a bonus to them in their bid to reach the final on Wednesday evening.