TWO goals in quick succession at the start of the final quarter ended Kildare’s hopes of an All Ireland Final spot as they lost out to Galway on a scoreline of 2-10 to 0-11 in the semi final of the ZuCar Ireland LGFA Minor “A” Semi Final in Kinnegad on Wednesday evening. 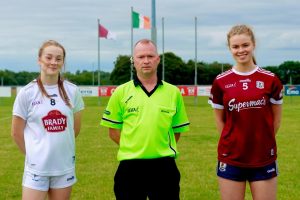 With the sides locked at 0-8 apiece, following a Sophie nGai levelling free, the game turned Galway’s way when first Molly Mulryan netted for the Westerners and that was followed a minute later by a second goal, this time from Laura Scanlon and Kildare could never recover from these hammer blows.

To their credit the Lilywhites never wilted and they continued to challenge the Connacht champions. Points by Edwina Birchall, the impressive Sophie nGai and Erin Brereton Foley couldn’t bridge the gap though and Galway ran out five point winners.

It was all very tight for three quarters of the game. Aine Shaughnessy opened the scoring for Galway on three minutes but Ava Cullen had the sides level three minutes later. Two Sophie nGai frees put the Lilywhites in front 0-3 to 0-1 at the start of the second quarter but Mairead Glynn and Shaughnessy responded for Galway to bring the sides level by the 24th minute.

Points were exchanged with regularity but Kildare went in 0-6 to 0-4 down at half time. Within a minute of the restart another nGai free put just one between them before Mulryan stretched the lead to two points again at 0-7 to 0-5 in the 32nd minute.

Hannah Breen and Galway’s Sarah Duffy exchanged points and Kildare fought back again to level the game through Erin Brereton Foley and nGai’s free to draw the sides level at 0-8 apiece in the 44th minute. Alas the goals came quickly after that and Kildare’s brave effort just fell short on the night after a great championship campaign by Darren Kendrick’s side which augurs well for the future of Kildare ladies football.

Full Report, Photos and Reaction in next Tuesday’s Kildare Nationalist.