Shocks, Near Shocks, And Near Misses – It’s The Championship, Baby -The Supporter

IN this week’s Kildare Nationalist, in your shops now or on line at www.kildare-nationalist.ie, The Supporter casts an eye over the Preliminary Round of the Kildare Football Championship.

“IN truth, the draw was a little disappointing, given that it was “open”, with the big guns generally avoiding each other, with one exception.” – The Supporter, 12 July 2022. I don’t know what eejit took over this column last week, but they clearly know very little about club football in Kildare. 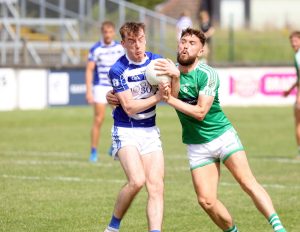 What a fabulous weekend of football across the county. I stationed myself in Headquarters for Friday night and Saturday and saw all five games. I did consider an overnight stay but there’s no way you’d sneak a sleeping bag past Noel and Tango on the gate. Then there’s always the issue of the, er, “facilities”. I see they closed the entrance to the jacks at one end, which surely risked at an environmental disaster. That place needs a good breeze airing it at the best of times and in 25 degree heat heaven help us.

To be fair to the County Board, as we always are, the CCCCCC under Mick Mullen came up with one of the best formats for a club championship in the country last year and with a little tweaking to avoid repeats in the semi-finals this time it should be another hugely competitive one. There are four clear favourites for this year’s senior crown and who’d have imagined the trials and tribulations that three of them went through in Conleth’s. I didn’t see Celbridge having not yet mastered my powers of bilocation.

Athy got us under way on Friday night and I thought they would sail through that one, despite a five-day turnaround from the league final. That seemed unfair but I understand a Friday night fixture was requested by the club. Barry Kelly was absent through injury and his attacking from deep was a big loss for them. Indeed, one of the more interesting pastimes at the weekend was trying to figure out whether absentees were injured or on holiday. At least we don’t seem to have the issue in Mayo where half the county’s players are playing ball in the US of A. They obviously interpreted the “split season” to mean something altogether different.

Aaron O’Neill played outfield for Carbury (Mark Donnellan might have wished he did likewise on Saturday) and his pace was too much for Athy to handle in the opening period before Cathal McCarron took a Tyrone like approach to proceedings and took a red for the team. Aaron didn’t feature much after that. I wouldn’t speculate as to whether the two events are linked. Favourites shipping red cards would become a feature of Saturday too. And black ones too, with Davy Burke’s Sarsfields hitting the self-destruct button in a big way. Chalky White is too experienced to lose his discipline with a colleague already sitting in the sinbin. He shuffled off past Davy without a hint of eye contact. Wise move.

With the crowds small enough on Saturday (a pity but understandable with families lapping up the first sun since the late seventies), you could hear every word uttered on the pitch and Burke’s coaching and coaxing of his players through every last detail of Saturday’s game was interesting to behold. Compare and contrast with the likes of Athy’s Vinnie Walsh, studiously watching proceedings with the air of a man contemplating the latest Butler Yeats exhibit in the National Gallery. It takes all sorts. Neither were happy men for large parts of their games but all’s well that ends well.

The noon entertainment on Saturday was provided by Raheens and St Laurence’s and both defences had clearly just been dragged bleary-eyed from the scratcher, particularly the men in blue and yellow.

Raheens eventually woke up and justified favouritism, scoring 4-16 is impressive enough going with Paddy Woodgate having to do “maor uisce” and Robert Thompson proved an able replacement. Speaking of uisce, referees rightly took a pragmatic approach to the preponderance of water carriers on each side (not in the Didier Deschamps sense I hasten to clarify).

Kieran Harris in the Sarsfields match, decided a covid-style official break was necessary, as much for his own benefit as the players’ one suspects. That encouraged a visit to the referee from county secretary Christine Murray and the body language suggested Kieran needed a reminder of the tightness of the schedule. After all, sunset was scheduled for 9.44pm and there were still two more games to come. Indeed, the day reminded me of an underage blitz with players lined up at the fences outside the dressing rooms waiting for the previous game to finish.

I had flashbacks too to a Community Games I’d participated in on the hallowed turf back in the aforementioned sweltering seventies, another day-long affair. My Olympic dreams came a cropper that day, but I maintain I was more suited to the longer distances and was only getting into my stride when bringing up the rear in the 200 metres.

Naas perhaps have a similar profile judging by their performance against Moorefield. Like Athy and Sarsfields they self-destructed through over-zealous physicality, Seán Hanafin this time showing his inexperience with two needless yellows (aren’t they usually?). The brother was among those who bailed him out, Darragh Kirwan another. A great line on social media described Moorefield as playing with a duvet defence, let alone a blanket, but that perhaps is a little harsh on a team who might have held out for a(nother) famous win. Naas, though, showed they can win “ugly”, and it will take a very good team to deny them a second championship.

No one I saw at the weekend looked up to that challenge but it’s early days yet and Naas players, particularly James Burke and Brian Byrne, have a lot of miles in the legs over the last year. Getting back to athletes, the outstanding player at the five games I saw, was Cathal McCabe, the same man I voted Hurling Player of the Year on this page a few weeks ago. What a talent he is, a real athlete who can score off both feet from any range. How Brian Flanagan must rue not having him available for the Under 20 final against Tyrone.

Kildare have had some incredible dual players – Pat Dunney, Tommy Carew and Johnny Byrne spring to mind. I don’t think Larry Tompkins picked up a hurl, but the brother Joe did. Mick Moore, David Slattery, Seanie Johnston, the list goes on. McCabe if he has any inclination towards the big ball at county level, would be a big addition, but I suspect David Herity would have a thought or two on that idea.