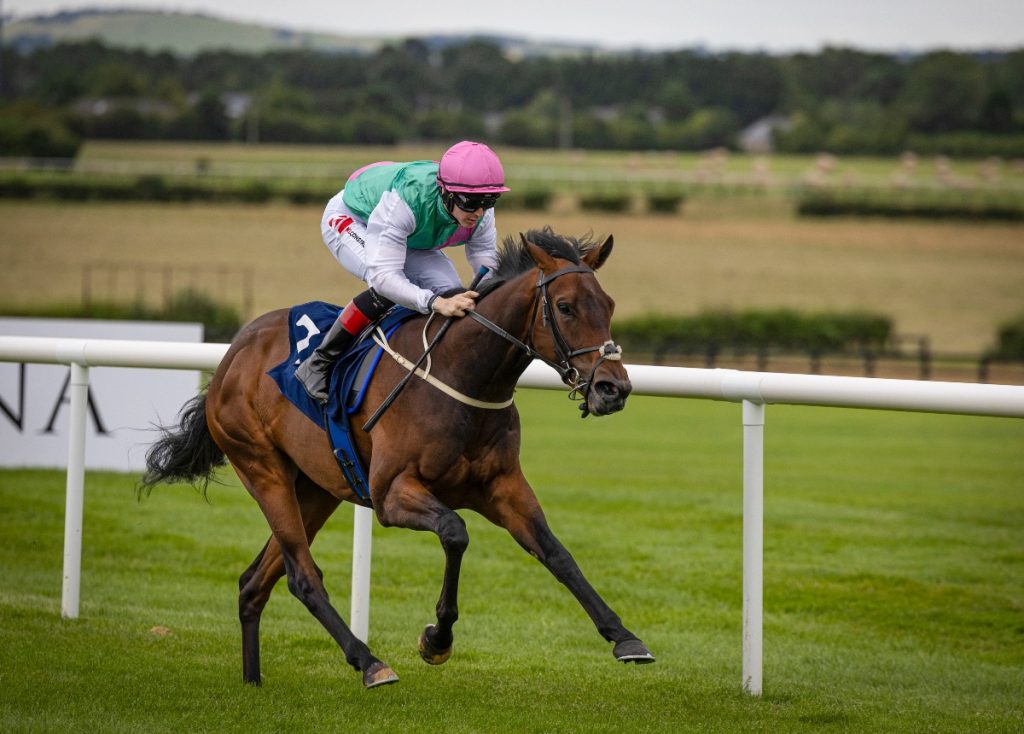 Apricot Twist, pictured winning at Naas this month, is declared to run in the €300,000 Irish EBF Ballyhane Stakes at Naas on Monday

Ireland’s first training partnership, Eddie and Patrick Harty, are eying their biggest success to date as dual licence holders when the exciting Coralillo lines up in the €300,000 Irish EBF Ballyhane Stakes at Naas on Monday.

A full field of 24 runners has unsurprisingly been declared for the third renewal of the Irish EBF Ballyhane Stakes which is for juveniles that are EBF eligible and whose sire had a median price of not more than €75,000.

The brainchild of Ballyhane Stud’s Joe Foley has been a roaring success and of the 13 winners declared in the 24-strong field, Fairyhouse debut winner Coralillo has the Hartys counting down the hours to the Bank Holiday Monday bonanza.

“We are really looking forward to running Coralillo on Monday in the Irish EBF Ballyhane Stakes,” said Patrick Harty. “She is a very exciting filly to have in the yard and a very fast filly.

“She won impressively on debut. I wasn’t surprised by her winning but was certainly impressed by how she quickened up to take the lead so easily. She ran a little bit green when she got to the front, but I’d like to think that a faster pace will only give her more of a chance.”

The daughter of Havana Grey is a first runner for the stable in the very familiar colours of Middleham Park Racing, who have proven to be a massive success story in racehorse ownership.

The predominately British-based syndicate has enjoyed notable success since forming in 1995 and is no stranger to success at Naas, with the high-class Kool Kompany winning at Listed level back in 2014.

Harty continued: “It is very exciting to have a filly in this quality of race and to have a horse with Middleham Park as well.

“Tom Palin and I have known each other for quite a few years having met when I was working with Nicky Henderson. We spent the last year looking for the right horse to have together and making sure the first one is the right one and hopefully Coralillo is as good as we had hoped.

“She started on a great note and let’s hope it continues. I know that Middleham Park have aspirations to move into the Irish market, having dipped their toe in a few times but hopefully Coralillo will increase their profile in this country, and we look forward to training more racehorses for them.”

Last year’s winning connections of Ger Lyons, Colin Keane and Juddmonte will once again be hopeful of snaring the major pot with the ultra-impressive course and distance winner Apricot Twist returning the Kildare venue.

The daughter of Expert Eye recorded one of the widest margin victories of any juvenile in Ireland this year, with seven and a half lengths to spare from her nearest rival just under a fortnight ago and the Lyons team will be hopeful of emulating Sacred Bridge in this race 12 months ago.

Lyons also runs the Clipper Logistics Group-owned Gypsy Woman and Slan Abhaile in the colours of the Silver Spoon Partnership.

The Donnacha O’Brien-trained Badb is officially the highest-rated runner at declaration time. The Cork maiden winner has been placed in Group 2 and Group 3 company this season and Gavin Ryan rides the 99-rated daughter of Footstepsinthesand.

British-trained representation comes in the shape of Richard Fahey’s Rousing Encore, who will be the mount of Oisin Orr with that duo flourishing since the Donegal native moved to England to work for his fellow Irishman Fahey earlier this season, while David O’Meara’s Family Ties will be ridden by Danny Tudhope.

Aidan O’Brien will be looking to win the race for a second time when relying on Victoria Road, while Joseph O’Brien saddles four, with dual winner All Things Nice joined by Basil Martini, Voce Del Palio and Montesilvano.

Kevin Prendergast, who trained the runner-up in the first renewal of the race, has Woodcock Flight, a son of his Irish 2,000 Guineas winner Awtaad, to go to war with on Monday.