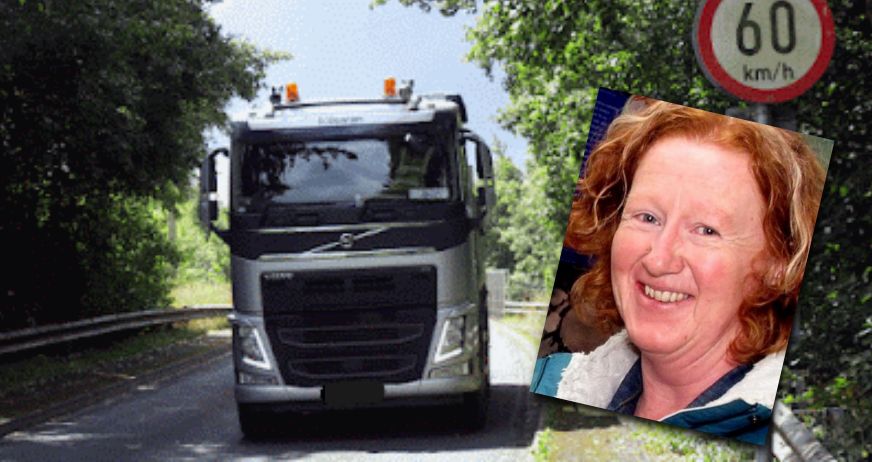 Sunnyhill resident Orla O’Neill and a truck on the road

THERE was a cautious welcome — but also a warning — from residents of the Sunnyhill Road in Kilcullen last week when they heard that Kildare councillors had voted down proposals for the Speed Limits Review 2022.

“The difficulty is that this isn’t over for us on the Sunnyhill Road and these bye-laws will come up for another vote,” says Orla O’Neill, who has campaigned on traffic and speed issues on Sunnyhill for 18 years. “We have no guarantee the new proposals will exclude Sunnyhill from an increased speed limit.”

The proposals included a plan to increase the limit to 80km/h from the main stretch of road currently at 60km/h. Residents have been seeking a reduction in the limit for years, because they say the road isn’t wide enough, and also has heavy trucks traffic. They have shown multiple instances of collisions and damage to property along the road from the existing traffic. They believe it is only a matter of time before pedestrians or cyclists are injured or worse.

Following the vote, Orla O’Neill has challenged councillors of the Kildare-Newbridge MD who voted in favour of the proposals to justify their stance, despite robust submissions from the residents in the public consultation process undertaken last September.

“There is not one person I know in Kilcullen who thought increasing the speed limit from 60kph to 80kph on this road was a good idea,” she says. “Even those people who don’t live on the road know it to be lethal.” She adds that if the councillors concerned ‘remain unconvinced’, they can all join her and the Sunnyhill Residents Group to meet with them on the road to observe directly the reasons for their campaign.

Cllr Tracey O’Dwyer, who voted against the county-wide proposals directly on the basis of the Sunnyhill Road issue, says she can’t understand why there are attempts to raise speed limits on rural roads when on the other hand there are proposals to raise penalties for speeding because of the increase in road deaths and injuries.

“It just doesn’t make sense,” she says. “If appeals were already being considered in relation to some roads, and ‘engineering solutions’ were being put in place, that was an indication that the limits review process is somehow flawed. At a time when we are trying to encourage people to walk and cycle more, increasing the speed goes against this. The objective appears to be to ‘streamline’ speeds on our roads — I would prefer to see the objective to be to make our roads safer for all road users.”

She also wonders if public consultations are now just ‘box-ticking’ exercises by officials in the council, citing a number of instances in the Kilcullen area where no real consideration of local submissions to the process seems to take place, including the Sunnyhill speed issue, and the Market Square re-development plans.

Newbridge Parish on the hunt for Pastoral Worker