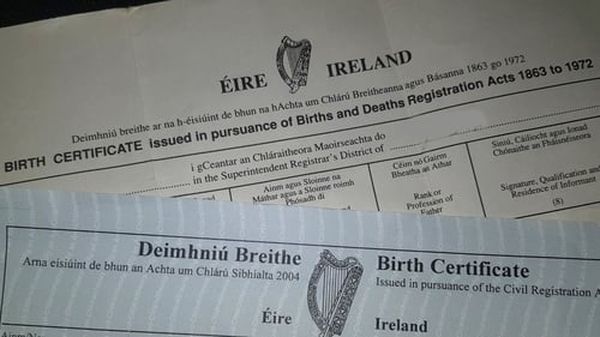 THE Contact Preference Register (CPR) has barely been open a month, but already 36 optimistic people from Kildare have applied in the hope of finally completing their complicated personal jigsaw, and finally put together the pieces of a life fractured by society and the church.

Nationally, a total of 891 adopted persons and relatives have already applied to the new register, following the enactment of the landmark legislation on 1 July of the Birth Information and Tracing Act 2022.

This will give all applicants legal entitlement to full and unrestricted access to birth certificates, as well as birth, early life, care and medical information for any person who was adopted, boarded out, had their birth illegally registered, or who otherwise has questions in relation to their origins.

The new CPR allows applications to be made by those wishing to make contact, to request privacy, or to seek or share information with a relative, and will be operated by the Adoption Authority of Ireland.

Poignantly, there are only seven people with Kildare addresses seeking an adoptee, a figure which expands nationally to just 105.

Of the 891 people who applied to register their preferences in relation to contact, 786 applications were from adoptees, 90 were from birth parents, and 15 were other relatives.

As part of a public information campaign around the Act, a booklet on the important services being provided is being delivered to every household in Ireland.

“We are very encouraged by the number of people who have registered on the CPR,” said Patricia Carey, CEO of the Adoption Authority.

“Come October, when the free services under the legislation open, adoptees will finally have the right to access all of their birth information held by the state, which wasn’t the case previously, so it is a big deal.

“If they have applied to the Contact Preference Register, the adoption authority will also be able to facilitate contact between adoptees and birth parents and other relatives, at a level with which both parties are comfortable,” said Ms Casey.

The oldest applicant to the CPR was 81, while the youngest, aged five, had an application submitted by their adoptive parents. The mean age of both adoptees and relatives was 50.

More than 48,000 children were adopted from 1953 to 2021, while an additional 2,000-plus children were sent from Ireland to other countries – mainly the United States – and adopted in these countries.

In addition, an estimated 20,000-plus children were ‘boarded out’ – sent to live with foster families at a time before 1953, when there was no legal adoption in Ireland.

A website, www.birthinfo.ie, has been established for people seeking to make an application under the Act or seeking further information.