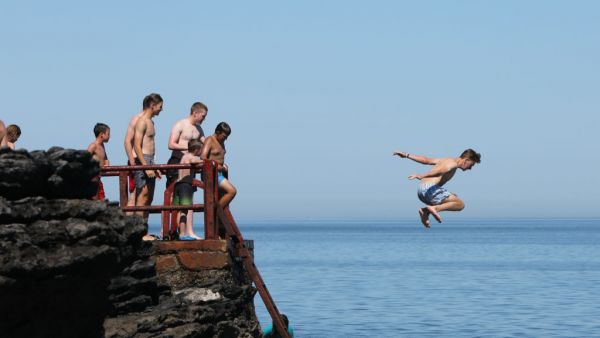 It comes as the country deals with a heatwave, with temperatures of 31 degrees recorded in Clonmel, Co Tipperary on Saturday.

Met Éireann has also issued a status yellow high temperature warning for Leinster, Cavan, Monaghan, Munster, Galway and Roscommon, valued from Sunday until 6am on Monday.

While the thunderstorm warning is valid from 3pm on Sunday until 9am on Monday.

The forecaster said while some places will stay dry, hit and miss thunderstorm activity along with hail and heavy downpours may lead to spot flooding and hazardous driving conditions.

Sunday will start off mostly dry, however, isolated heavy showers will gradually increase in coverage through the late afternoon and evening.

The previous record was set by both Ballybrittas, Co Laois in 1975, and by Oak Park itself in 1995.

A heatwave was officially declared in Ireland on Sunday.

It’s after temperatures have exceeded 25 degrees for the fifth day in a row, with Moore Park in Cork, recording 28.8 degrees on Saturday.

Isolated showers or thunderstorms will develop through the day, increasing from late afternoon with spot flooding, intense lightning, and a chance of hail.⛈️ pic.twitter.com/4Ey2XPuqYv

Sunday will be mostly dry in the morning, with hazy sunshine.

It will be another hot day, especially in Munster and south Leinster, with temperatures generally reaching between 24 to 30 degrees, cooler though in the northwest, and in some other coastal areas where coastal fog may linger and in some spots sea breezes will develop.

Otherwise winds will be light northerly or variable.

While a few isolated heavy showers or thunderstorms may develop throughout the day, they will gradually increase in coverage through the late afternoon and evening.

The most intense slow-moving deluges, will cause some spot flooding, intense lightning, and a slight chance of hail.

On Sunday night, scattered heavy showers and thunderstorms will continue overnight and at times merging to longer spells of rain, with local deluges and spot flooding possible.

Remaining warm and humid with temperatures dropping to between 11 and 13 degrees in Ulster and north Connacht, generally staying above 14 to 17 degrees elsewhere in light northerly or variable winds.

On Monday scattered showers and thunderstorms will continue to affect the southern half of the country mostly, becoming intense through the afternoon with an enhanced risk of flooding.

It will be fresher, but drier further north with just isolated showers and intermittent sunny spells.

Highest temperatures will return closer to average, ranging from a cool 14 to 16 degrees in the north and northwest to between 17 and 23 degrees elsewhere, while light to moderate northerly winds will freshen near Atlantic coasts.