IN this week’s Kildare Nationalist we feature an interview by our Athletics Correspondent, Perri Williams, with Kildare AC athlete, John Fitzsimons in advance of his participation in the European Athletics in Munich on Thursday.

IT’S 3pm on a Tuesday afternoon and the airport in Budapest is busy. A group of athletes have been dropped off early – tired after their races the day before. It’s the start of a busy 10 days for most of them. Their last race before the European Championships has been run, another box has been ticked. For Kildare AC’s John Fitzsimons that box was ticked with a big smile. A 1.45.7 over 800m marks his second fastest time ever over 800m and just marginally short of his PB. An elated John was only too happy to talk athletics. He had three more hours until his flight to Dublin. 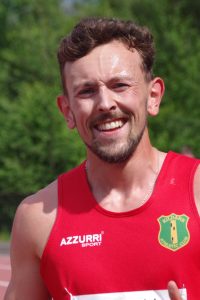 Kildare AC Athlete, John Fitzsimons, who competes in the heats of the European 800m in Munich on Thursday Photo: Perri Williams

Remarkably for a guy who started athletics at 5 years of age, it was not until he was U16 that he got his first national medal -a gold in the 800m. He had qualified for Nationals in the preceding years but never made the finals. A late growth spurt, maturity, and some good athletic genes along with hard work and good coaching contributed to that gold medal. John comes from athletic stock. His mother Sandra Murphy was a middle-distance runner, his dad John Fitzsimons a cross country and road runner. Going back further his Grandfather Anthony Fitzsimons founded Kildare AC and his maternal Grandfather Paddy Murphy was a 2.16 marathon runner back in the 1970s. It was only fitting that a young John should attend training and watch his parents as they completed their sessions. Fast forward 19 years later and that little 5 year old is now part of an Irish team competing in the European Championships this week.

The European Championships is not an event that is new to John. In 2017 John finished 3rd in the European Junior 800m in Grossetto, Italy. The journey to those European’s was a little unconventional. Following on from his U16 National 800m success, a winter of injuries and the decision to run 400m U17 proved to be the correct one. John won the U17 400m and was selected for the Celtic Games – his first Irish International vest.

His coach (his mother Sandra) realised that she had taken John as far as she could, and he would benefit from new expertise. She sought out Joe Ryan of Mullingar Harriers (who is now the middle-distance coach at DCU). Joe was already coaching some up-and-coming 800m athletes from his own club.

Joe has seen the potential for John. A bout of runner’s knee interrupted his 2016 winter training resulting in the indoor season being a bit “hit and miss”. Then in April 2017 Achilles tendon problems looked like his bid to qualify for the European Juniors was over. Lots of bike work and cross training contributed to a good time over 400m and renewed hope was born. “With a bit of grit and consistency, I did a decent bit of training in May and June and ran the standard just in time,” said John. And of the race itself; “it was hot,” said John. “Very hot, like 33 degrees. Something I was not used to. I usually run brutal in the heat. The focus was on keeping the body temperature down”. John had three races in three days all run with his Achilles strapped up. “The race started off slow and then punched. I was 5th or 6th at the bell. The pace picked up significantly with 300m to go and I was in 3rd place with 200m to go. The top three athletes stayed in the same position for the final 200m. I was the unexpected medallist for the Irish team to be honest,” he beamed.

“I was ranked 19th or 20th coming into the race and there was no expectation or pressure on me. My coach and my parents believed in me. The ranking I had made me believe that I was good enough to go further and I did.” After the European Juniors it was time to focus on the next stage of his athletics career. The decision was to stay in Ireland or go to America. Competing at Senior level, even what distance to focus on. Then there was college courses to decide upon.

In the last five or six years there has been a renewed exodus of Irish athletics talent flocking to American Universities. Middle distance runners took up scholarships with Providence, Iona, Stoneybrooke, Iowa State and more. For any Irish runner, the lure of the US is tempting. “Not for me,” said John. “I was happy with my life in Ireland. I had everything I needed. I trained with the likes of Mark Millner and Kevin McGrath. My family was steeped in Athletics, I had a good coach and college life was sorted in Ireland”. Fitzsimons resisted the temptation to head stateside. A stint in DCU was followed by a switch to IT Carlow where he received the elite scholar scholarship. This was at a time when the likes of Molly Scott and Marcus Lawler had also opted to stay in Ireland, and they too attended IT Carlow.

John’s eyes were set firmly on the Olympics. Covid delayed them by a year. “The Olympics were always going to be a tough test”. John missed 16 weeks in 2021 with an Achilles injury. “I was disappointed when I realised it was not going to happen”. Not reaching the qualifying standard was not from the lack of opportunity or from effort. “I always give it my all”, he said. “The number one reason I run is to appear in championships and represent my country”.

Looking back on the disappointment of 2021, this was actually a game changer for John. He and his coach Joe Ryan took a fresh look at his 800m training programme. They looked at what other 800m athletes were doing for their training. They examined his weaknesses and where his own training needed to be tweaked. Top speed was one issue that needed to be addressed. 800m running had moved paradigms. It was no longer part of the 800m/1500m happy couple of athletics running. Gone were the days when it was automatically assumed an 800m or 1500m athlete could easily run both races. Sure, some athletes like Scotland’s Laura Muir run some 800m and 1500m doubles. In the main, 800m has become a long sprint. Endurance, while still essential had been superseded in importance by speed and power. John needed to change two things – focus on top- speed and look at how to improve his recovery from sessions.

This change focused on just three workouts per week plus a speed session which changed on every other week, added to these were cross training and gym sessions that focused on strength and an increased emphasis on plyometrics. “The session might be two sets of 30m to 60m reps finishing off with a hard 150m changing the following week to 1 set of 30 to 60m followed by 4 x 150m off 60 sec – with a pace marginally faster than his 400m time.

At the start of the season the plan was to do both the European and World standard for 800m. “It was a relief to get the European standard out of the way in May”, said John, referring to his race in France. It was unfortunate that it was just short of the World standard. “So, it was unfortunate that I was left chasing the world standard right up to the end of June”. There were plenty of race opportunities. His agent presented his coach and himself with races where he could get an invite and the team of John and Joe chose those that would benefit him most. “Races take a lot out of me. I don’t race well from back-to-back races, so in a way it was a relief when the world qualifying period came to an end. I could then focus on getting a good block of training in”.

The count down to the European Championships in Munich had begun. John ran the nationals, which was billed as a head-to-head between himself and Donegal’s Mark English. John was beaten by the elder and more experienced English. Then came the opportunity to race in the Diamond League B race in Oslo. That was a great opportunity to be around high calibre athletes. “The buzz was amazing”. A 400m at the AAI games was a mini tester at the end of July. John ran a PB. “I knew I was in good form. The plan was to test the form with a 400m and then run a race 10 days out from the Europeans,” said Fitzsimons. That race was Hungary, where he ran 1.45.7. “Five days before Hungary I did a great session. I ran 4 x 300m all in or around 36.3. I knew something good was coming”.

And what is the plan for the week before the race? “I will run my last session about 5 days out. Take the Tuesday off and then just some strides on the Wednesday. Thursday morning are the heats of the 800m”. John has learned from his previous racing experience that morning races need a little bit more attention. “I need to get up a bit earlier”. This means planning bedtimes the week before. And what is the expectation for the European 800m? “I expect to get out of the heats into the semi-finals. And I would be very disappointed if I did not make the final. I think there will be two Irish men in the final, Mark English and myself. Mark could medal”. You could sense the energy and enthusiasm in his voice. This was an athlete whose sole reason for running is to run in championships “and represent my country”.

John Fitzsimons will run in the heats of the 800m this Thursday 18 August at 9.10am Irish time.

The Kildare Nationalist is in your shops now or on line at www.kildare-nationalist.ie