Naas And “Rasher” Sizzle In Championship Heat – The Supporter

The Supporter Column takes an in depth look at the Kildare Hurling Championships in this week’s Kildare Nationalist, in your shops now or on line at www.kildare-nationalist.ie

WE’RE just not made for the heat, the Irish.

On Saturday, I slapped on the factor 30 and headed into Hawkfield for a feast of Senior B hurling, the artistry formerly known as Intermediate. 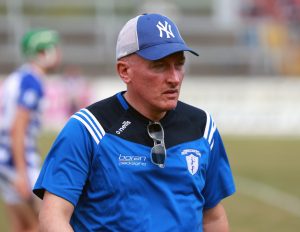 I’d noticed that a lot of Go Games for the kids were cancelled across the country due to the weather (I ask you!) but looking at some of the body shapes ambling around Pitch 1 in Hawkfield I was comforted to see the Order of Malta in attendance.

After a seven-goal stroll for Éire Óg Corra Choill in the first game (no one will stop them returning to Senior A), brains clearly became frazzled in a close bottom of the group battle between Sarsfields’ A team and Celbridge’s reserves.

Referee Eamonn Kelly was working overtime with no umpires at the dressing room end and only one at the Milltown End, but he wasn’t happy when he spotted that his one helper was a teenage lad. “I can’t have him umpiring,” says Eamo.

I presume that was on health and safety grounds with sliotars flying this way and that, though rarely between the posts. An adult relieved the lad. Ten minutes into the game a fella made the mistake of wandering down the road behind the top goal and before he knew it, he was manning the flags at that end.

Eamo’s linesmen were dressed for the occasion. On the stand side our man was sporting very fetching Ray Bans but for sartorial elegance his opposite number won hands down with something akin to one of those Australian Cork Slouch Hats, but with the corks cut off thankfully.

Water breaks were back of course, though no one offered them to the Supporters, melting away pitch side, and when two players banged heads in the fourteenth minute some randomer shouted “water break” to no one in particular. Players charged to the shadow of the sideline and the clock took this as its instruction to pause. That it started in the first place is always a relief in truth.

Eamo was having none of it, though. The water break would happen when he said it would happen, he informed all and sundry. The man wasn’t having a good day and we were barely a quarter of an hour in. He played on, calling a halt a minute later. The clock of course had forgotten to start again so confusion reigned.

It was shortly after the break that I noticed a fella of advanced enough years pushing a baby’s buggy back and forth behind the same Milltown End goals that our teenager had been evicted from. I assume his pride and joy of a grandchild was now at the mercy of the Sarsfields forward line who were not the most accurate of beasts at that stage it has to be said. Of all the places to push a buggy in Hawkfield…

But neither Eamo nor Granddad were the stars of the show, that honour went to outstanding Sarsfields goalkeeper Denis O’Callaghan, as the match programme called him, or Rasher to his fans in the stand.

I lost count of the number of brilliant saves Rasher made. You might say he was in sizzling form. Surely, David Herity will be having a look. In one goalmouth incident at the same Milltown End a ruck saw a cloud of thick dust rise, obscuring events from view. You half expected Clint Eastwood to emerge on horseback, but it was our man Rasher triumphantly driving out with the ball to clear his lines for the umpteenth time.

Late in the game, as it went down to the wire, Rasher was there again to make a save, win the ensuing ruck, and dart out of goal, knocking Celbridge players aside as he ventured out to the 45-metre line. This movie needed a Rasher point for the Sash as its finale, but the producers dropped the ball on that one. Still, a big win for the Newbridge men.

Naas have half the county’s population to pick from it seems and it was no surprise their B’s slaughtered Kilcock’s A’s in Saturday’s third game. A final between them and Éire Óg looks inevitable.

The sun was doing its worst even at that hour of the day, though, with one Kilcock player getting particularly hot-headed. In a fit of pique, the lad grabbed the stick of an opponent and drop kicked the thing over the roof of the stand. Hopefully granddad and the buggy weren’t walking at the back of the stand.

“That’s a new one on me,” says the Naas player as he retrieves a spare camán. Me too. It was that sort of day. Bring on the rain!

Sunday was as hot if not steamier and I went into Conleth’s hoping to see Maynooth give a good account of themselves against Naas in the Senior A. My god but Naas are so far superior to anything in Kildare at this stage it’s no longer funny.

I don’t like to go down a “split Dublin” sort of road here but with a population of well over 20,000 and growing and only one club in the place, plus the momentum from the Naas CBS production line and access to hurlers from football-only clubs in their hinterland, there seems to be a time coming when the strength of Naas hurling becomes the weakness in Kildare hurling. We might already be there.

The only challenge Tom Mullally faces is picking which fifteen to start their semi-final and final along with keeping his players engaged. I know Celbridge got within three points last year but that is an anomaly when you take the last two years together.

Naas will win Kildare for the fourth year in a row and have not lost or drawn a championship match in Kildare or Ireland in 1,008 days dating back to their defeat to Tullaroan in Callan in November 2019.

That’s something to be celebrated and admired, but its implications need careful consideration by the Hurling Committee and County Board.

Before I go, I mentioned the Order of Malta in a jovial context above, but their diligence and care in treating injured players should be acknowledged and appreciated. Moorefield and Ardclough players suffered serious-looking injuries in the games I was at this weekend, and I wish them both a speedy recovery.