THURSDAY night in Tallaght is a big night Kildare’s Hayley Nolan and Vera Pauw’s Republic of Ireland Women’s National as they host Finland, in front of a sell out crowd, in their penultimate Group A qualifying game for the 2023 FIFA Women’s World Cup. Nolan has one senior cap, so far, for the Republic of Ireland. 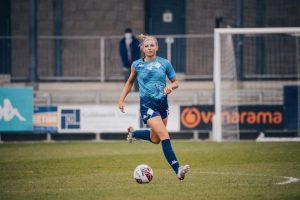 Kill native, Nolan, 25 a past pupil of St. Mary’s College Naas, has been recalled to the Women’s Irish Squad for the first time in a year after recovering from a shoulder injury which kept her out of the Irish squad and her club, London City Lionesses.

Hayley, who played underage LGFA with Kildare and has featured on the pages of the Kildare Nationalist over the past two years or so, returned from her scholarship in America to sign a professional contract with London Lionesses for the last two seasons. They were narrowly defeated  by Liverpool FC who took the top spot of the league 2021 to be promoted to the FA Women’s Super League. However this year, London Lionesses have dominated their first opening matches in the league, playing Crystal Palace and Charlton.

Commenting on her recall to the Irish squad Hayley Nolan said  it was a huge opportunity after recovering from the shoulder injury.  “I’ve changed positions from midfield to defence in which I am more confident and comfortable. I cannot wait to fight for my position on the team and wear the green jersey again.”

In team news defender Niamh Fahey is ruled out with a groin injury, which may open the door for Nolan to start on Thursday night.