FOUR Group 1 races are up for grabs at the Curragh on Sunday and the second day of Longines Irish Champions Weekend is highlighted by the Comer Group International Irish St Leger. 13 horses go forward for Friday’s final declaration stage and leading the way is Aidan O’Brien’s all-conquering Kyprios which bids to extend a winning run that includes top-flight success at Royal Ascot and at Goodwood last month. 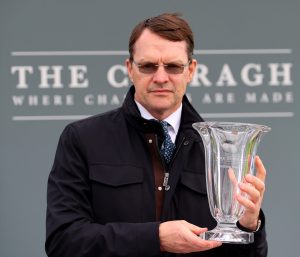 Paddy Twomey has this morning added Rosscarbery to the race while Joseph O’Brien has left his four-time Curragh winner Raise You and Cleveland in the season’s final Classic. Dual winner Search For A Song, trained by Dermot Weld, the Ger Lyons-trained Camorra, William Haggas’ Hamish, Tony Mullins’ star Princess Zoe and the sponsor’s Seattle Creek are also in the mix. A bumper total of 25 remain in the field for the Group 1 Al Basti Equiworld, Dubai Flying Five Stakes and they are headed by the John Quinn-trained Highfield Princess, the clearcut winner of the Coolmore Wootton Bassett Nunthorpe Stakes at York. A strong British challenge also features the Michael Appleby-trained Raasel, Flotus, trained by Simon & Ed Chrisford, the James Tate-trained Royal Aclaim and Ebro River, last season’s Group 1 Keeneland Phoenix Stakes winner at the Curragh, which was supplemented this morning by trainer Hugo Palmer. Edward Lynam’s Romantic Proposal, winner of this race a year ago, fellow Group 1 winner A Case Of You, trained by Ado McGuinness and the Johnny Murtagh-trained Ladies Church and Jack Davison’s Mooneista, separated by just a short-head in the Barberstown Castle Sapphire Stakes over this course and distance in July, head the home challenge. Seventeen two-year-old fillies go forward for the 50th running of the Moyglare Stud Stakes and among them are the Aidan O’Brien-trained Meditate, unbeaten in four starts, the Charlie & Mark Johnston-trained Lakota Sioux and big local hopes Tahiyra for Dermot Weld and the Michael O’Callaghan-trained Olivia Maralda. Joseph O’Brien has supplemented course and distance winner Al Riffa for the Goffs Vincent O’Brien National Stakes and he is among nine remaining in the race. Aidan O’Brien is typically well represented with the likes of Aesop’s Fables, Auguste Rodin, Cairo and Hans Andersen with the Charlie Fellowes-trained Marbaan and Richard Hannon’s Persian Force making up the challenge from across the Irish Sea. Brian Kavanagh, CEO of the Curragh Racecourse, said, “Everybody here at the Curragh is greatly looking forward to racing on Sunday featuring four consecutive Group 1 races across a range of distances. The fields after today’s forfeit stage are very exciting and full of interest and quality. The support programme is very strong also. There will be lots of different off-track entertainment on the day, including the Moyglare Stud Kidzone, music from Allie Sherlock, the Newbridge Gospel Choir and the Artane Band. There will also be a Parade of Champions featuring well known retired racehorses such as Tiger Roll, Douvan and One For Arthur in association with Treo Eile.”