BEN McCormack (Sarsfields) is Kildare only nominee for the PwC  Football All Stars team for 2022. Jimmy Hyland (Ballyteague), Ryan Houlihan (Moorefield) and Kevin Flynn (Celbridge) could consider themselves unlucky not to have been included in the list of nominees which includes 12 players from All Ireland Champions, Kerry. 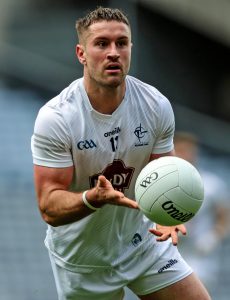 The list of 45 nominees, which was announced on Wednesday morning, is spread over 11 different counties.

Ben McCormack was in outstanding scoring form for Kildare over four championship matches which included Leinster victories over Louth and Westmeath as well as a loss to Dublin in the Final before bowing out narrowly to Mayo in Round 1 of the All Ireland series.

The Sarsfields man scored 0-15 in that championship run, all from play. Jimmy Hyland scored 2-19 over the same period which placed him joint fifth on the scoring charts topped by Galway’s Shane Walsh.

We extend our Congratulations to Ben on his nomination.

Uachtarán CLG Larry McCarthy said: “I want to congratulate all of those who have been nominated for a PwC Football All-Star and commend them on their contribution to what was an excellent football championship.

“It was fantastic to see crowds being able to flock back to our games this year. At a time of change in our football structure and season calendar what remains constant is the ability of our players to light up the campaign and the pick of the crop are here in these nominations.

“To make this shortlist is a significant achievement and I want to acknowledge the work that has gone into it and know that being shortlisted is also a huge moment for the families and the clubs of the players involved, and especially for David, Shane and Cillian and their nomination for PwC GAA/GPA Footballer and to Lee, Ethan and Jack for the PwC GAA/GPA Young Footballer of the Year nomination.

Tom Parsons, CEO of the GPA added: “Our games are primarily about what we achieve as part of a team. However, there is always a place to celebrate individual excellence and the PwC All-Stars are the pinnacle when it comes to individual recognition in football and hurling.

“I want to wholeheartedly congratulate all of the nominees announced today. In a season of change, there were many stand out moments and memories that will stand the test of time.

“These 45 players were adjudged to have been the best of the best in 2022 and are deservedly nominated to be considered for the final 15. I also want to congratulate David, Shane and Cillian for their PwC Player of the Year nominations and to Ethan, Jack and Lee for being nominated in the Young Player category.”

Feargal O’Rourke, Managing Partner, PwC, said: “Heartfelt congratulations to each of the 45 footballers who have been nominated for a PwC All-Star and also to those shortlisted for the PwC GAA/GPA Footballer and Young Footballer of the Year from everyone at PwC. Each of you excelled as both individuals and as part of a team during the thrilling championship season and rightly deserve to be recognised for your hard work and dedication.”

Dating back to 1971, the All-Stars are selected by a team of GAA journalists from across print, radio, digital, tv and broadcast media. A separate Tailteann Cup team of the year will also be honoured this year.

The PwC All-Stars will be presented at a black-tie banquet in Dublin’s Convention Centre on Friday, 28 October. The hurling team will be announced live on the night with the football team being released publicly 24 hours earlier.