THE Joe Mallon Motors Kildare GAA Senior Football Championship is really hotting up and so are places on the Kildare Nationalist Football Team of the Week.

Following last weekend’s Quarter Finals Clane will play Athy while holders, Naas, will play Celbridge in the Semi Finals in the coming weeks.

Six clubs are represented on this week’s Senior Team of the Week as selected by our Selection Panel with Clane having the greatest representation with five players. Also included in the team is Sarsfields’, Ben McCormack, who received a PwC All Star nomination on Wednesday and the evergreen Eamonn Callaghan, who’s contribution helped Naas overcome McCormack’s team in the Quarter Final on Sunday last. 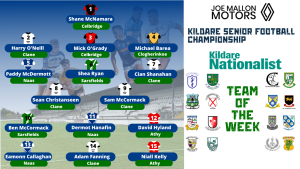