Broadford Looking To Reclaim Past Glories

SUNDAY sees the start of a series of Adult Finals in Kildare GAA circles leading up to the County Football Final on Sunday 9 October.

Pride of place on Sunday goes to the hurlers of Eire Óg Corra Choill and Wolfe Tones in the UPMC Junior Hurling Championship Final and Broadford V Maynooth in the Intermediate decider. 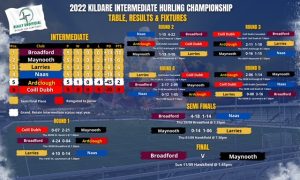 In the UPMC Intermediate Hurling Championship Final, Broadford are looking to reclaim past glories when once they were kingpins of Kildare hurling. On Sunday they face a Maynooth club which is beginning to become a force in hurling in the county at all levels.

Broadford topped the Championship Group with four wins from five with victories over Ardclough, Naas, Maynooth and St Laurences while Coill Dubh conceded their game to them. In the semi final Broadford had a resounding victory over Naas, winning on a scoreline of 4-18 to 1-14. Three first half goals from Aaron Smyth (2) and Luke Flynn were instrumental in that victory.

Maynooth finished second on the table with three wins and two losses. There were victories over Coill Dubh, St Laurence’s and Ardclough with losses to Broadford and Naas. In the semi final Maynooth had a 0-14 to 1-6 victory over St Laurence’s in what turned out to be a shoot out between Neil Delaney (Maynooth) and Chris Dunne (St Laurence’s). Maynooth’s stronger second half performance was sufficient to send them into Sunday’s Final.

Having already beaten Maynooth in the “League” Phase, Broadford will be favourites to win out on Sunday and with such players as Mikey Barea, Elian Scanlon and Luke Flynn in their midst they are expected to see out that favouritism.