Wolfe Tones, an amalgamation of Sallins and Kill, topped their Group with victories over Cappagh and Clane while Kilcock conceded their game to them. The Round 3 game against Clane turned out to be an interesting affair with Tones just winning out by a point, 3-13 to 3-12. 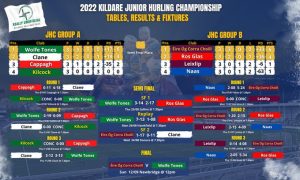 In the semi final Wolfe Tones looked liked they were about to exit the championship to Ros Glas only for a late Ross Doyle goal to level the game to send it to a replay. Tones were overwhelming winners in that replay though.

In Group B Eire Óg Corra Choill had big wins over Naas and Leixlip but they had to pull out all the stops to defeat Ros Glas 1-20 to 2-15 and so top the Group.

In the semi final a contribution of 1-9 (8fs) from wing forward, Niall Tierney helped the Donore men to a 1-17 to 0-13 victory over Clane.

Conor Egan, Aaron Carney and Ross Doyle are potent forwards for Wolfe Tones but EOCC have a good mixture of youth and experience and will look to Niall Tierney, JP Crotty, Liam Power and Sean O’Neill to see them to victory.