SUNDAY sees Day 2 of the Longines Irish Champions Weekend take place at The Curragh with the Comer Group International Irish St Ledger the highlight of four Group 1 races on the 11 race card which begins at 1.15pm. 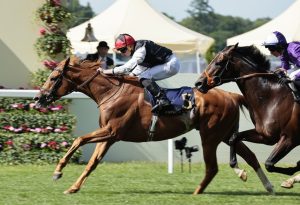 While Aidan O’Brien’s Kyprios is the star attraction, after wins at Royal Ascot and Goodwood, it is not a one horse race according Evan Arkwright, Racing and Sponsorship Manager at The Curragh.

Speaking to the Kildare Nationalists after final declarations were in on Friday Arkwright cited ground conditions, after the recent rain, as a possible game changer on Sunday.

“It’s very competitive and we will have terrific racing,” he promised. “We have 120 runners for the Group 1 races with a record 19 runners in the Flying Five Grade 1 and there is plenty of English interest, including in that one.”

“Kyprios will be favourite for the Irish St Ledger but with the ground likely to be on the softer side you might have to look at Princes Zoe, a great mare, who loves the soft ground and Raise You, a horse that keeps on improving will probably like it as well while an English horse, Hamish, for Champion trainer, William Haggis wouldn’t be out of it either. Moyglare have been such huge supporters of The Curragh, so we hope their horse, Kyprios, runs a big race but I expect he will be tested.”

“It’s the 60th year for Moyglare in Ireland and they have invested huge money into the Irish horse racing industry so it would be nice if they were to win. The Comer brothers, too have been great supporters. They sponsor the Ledger and a number of other races during the year and they have a number of Yards around The Curragh as well.”

The Vincent O’Brien’s National Stakes is off at 3.25pm is another Group 1 race to look forward to. “This has consistently been one of the best races in all of Europe for 2 year olds,” according to Evan Arkwright. “Aesop’s Fables for Aidan O’Brien will be favourite but Al Riffa, trained by Joseph O’Brien, was a very impressive winner here, even though this is a big step up for him. The English horse, Marbaan is trained by Charlie Fellows, a young trainer in Newmarket. It’s a big deal for him to have a runner in a race as prestigious as this. Johnny Murtagh has Shartash for the Aha Khan and Donnacha O’Brien has Proud and Regal but it will be tough to beat Aesop’s Fables.”

There are 12 runners in the Moyglare Stud Stakes which is for fillies. “Again Aidan O’Brien has the favourite here in Meditate. There are two English runners here although Sydneyarms Chelsea is unlikely to run but Lakota Sioux, trained by Charlie and Mark Johnston. is always to be respected as leading trainers in England,” Evan Arkwright tells us. He still comes down on the side of Meditate, though.

The Al Basti Equiworld Flying Five Stakes at 2.25pm is a most competitive race with 19 runners. It’s the only Group 1 Sprint in Ireland.

“The are plenty of English horses in there,” says Evan Arkwright, “the most notable is Highland Princess who won a Group 1 race in York last month. Looking at the Irish and A Case of You for Ado McGuinness, is a very fast horse, Romantic Proposal won it last year and then you have Ladies Church for Johnny Murtagh. It’s five furlongs so it will be a very competitive sprint so if you miss the break you could be in trouble.”

On the go since 2014 the Longines Irish Champions Weekend is unique in that it sees two racecourses, Leopardstown and The Curragh, combine with Horse Racing Ireland to stage one event which doesn’t happen elsewhere in the world.

“This weekend is right up there at the top of the Irish Racing Calendar,” Evan Arkwright believes. “As a weekend this is as big as it gets. When it came into being in 2014 it was to showcase Irish racing to the world and attract lots of visitors.”

There is plenty of non-racing activities at The Curragh on Sunday too. “There will be a lot of free entertainment for kids, which is under cover. Then we will have the Parade of Champions which will provide a great opportunity to such favourites like Tiger Roll, Douvan, and Hurricane Fly. We will also have the Newbridge Gospel Choir, the Artane Band and young singer, Allie Sherlock, who is making a name for herself,” Evan Arkwright concludes.

The Autumn Festival on 24/25 September will continue a very busy schedule for The Curragh in 2022.