Our Great Games Need To be Seen

IN vacant or in pensive mood as William Wordsworth might say! Well The Supporter column in this week’s Kildare Nationalist, in your shops now or on on line at www.kildare-nationalist.ie, was very much it the pensive mood as it pondered all things Championship.

We reprise the Column below.

SOMETIMES you’d feel sorry for the sports editor on a Tuesday. The paper gone to press on a Monday night, they can draw a brief breath once plans are put in place for interviews, articles, and match reports for the following week as the cycle begins again. 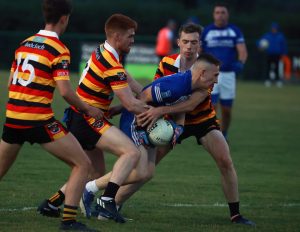 Rheban’s Sean Gahan has his run swallowed up by the eager Ardclough defence in last Thursday’s JFC “A” semi final in Hawkfield Photo: Sean Brilly

Then the phone flashes. Unknown number. Let it go to voicemail? No, it could be a lead on an exclusive or better still a few quid in sponsorship for the podcast.

Nope, it’s usually a reader with an opinion to offer on the latest edition. Sometimes it might even concern this column. Either the mother has honed her impersonation skills or there are one or two others out there who give this page a glance now and again.

Certainly, the powers-that-be in Kildare GAA seem to, and various parties have been known to make a call. Not necessarily out of praise for the paper’s comprehensive games coverage, particularly at this time of year, or to welcome some of the many ideas this column puts forward, however clumsily, for the betterment of the supporter experience or performance on the field. Sadly not.

Norman Vincent Peale was an American protestant clergyman and author of the Power of Positive Thinking. I doubt he ever attended a GAA meeting, but I like his saying that “the trouble with most of us is that we would rather be ruined with praise than saved by criticism.”

I ask, would the Joe Mallon Motors sign still be hanging limp in Conleth’s if it weren’t for this column’s contributions to the cause of Kildare GAA?

Granted, the facilities under the stand, which I may have mentioned once or twice, continue to resemble some sort of scientific experiment, but Rome wasn’t built in a day. Eventually the penny may drop, and we can spend one without fearing for our lives.

Others call in too. Big name players can be very sensitive at times, it seems. But often, it’s just a random reader, another supporter, who this column is intended to represent and appeal to. We do get the odd nod of recognition when a point rings true with someone, and we are not averse to praise here. Thanks, Seán in North Kildare. Everyone needs to be “ruined” occasionally.

Last week, though, a nice fella apparently rang in from a Junior club in the south of the county and his point was not concerning what was written here but what was not written. He rightly pointed out that there are some very talented players and good teams playing outside of Senior and Intermediate grades that rarely if ever warrant a mention here.

There’s a good argument that anyone proclaiming to be the “eyes and ears of the short grass” needed to broaden their span of coverage a little and we would love to do so. The same applies to camogie and ladies’ football, both of which are also well-covered in these sports pages if not so much in this column.

In the spirit of being “saved by criticism” perhaps I should make a point of getting out and about around the county a bit more to savour the delights of a Rheban v Ardclough (which as an aside sounded like an exciting set-to last week) but it is also a fact that most of the early-stage Junior games are played on weeknights, and we don’t all work inside the county.

Unfortunately, I haven’t managed to perfect the powers of bilocation. I’m sure Elon Musk is working on that, but I’ll probably have gone to the great St Conleth’s Park in the sky by the time he cracks it.

But we do have technology that could help supporters in this regard: streaming. And unfortunately for my editor perhaps this brings me back to the powers-that-be again. I cannot for the life of me fathom the attitude of Kildare GAA to their games, and we’ve had some great this year, being covered in the way that so many other counties are doing these days. Even Laois stream games. I have been told it is uneconomical to do so and if you take that at face value, why do other counties still regard it as a good idea?

There’s a lot spoken about the GAA losing “hearts and minds” with the condensed inter-county season but surely therefore it is more important than ever to generate greater interest in the club game? The CCC have put together great championship structures, at all levels.

So many supporters cannot go to games. They may be elderly or unwell, or overseas. It’s a county with a big defence forces community. How great would it have been for the soldiers in Lebanon to be able to have been able to watch Naas v Sarsfields last week?

Even if it loses a few quid, there are plenty of supporters who like me, struggle with their bilocation skills during the group stages of the championship where games are generally going on at the same time across two venues. I would certainly pay a few quid to catch up later that weekend or during the week on the ones I’d missed.

Surely, if it is done well, and that is always an issue, streaming games for a few months in the summer would be worth its weight in gold in promotional terms, even if it may be difficult to measure the overall impact? Even if only to create a little bit of a buzz about the games.

I know it’s a bigger ask than replacing a screw on an advertising hoarding or cleaning the toilets. It requires some organisation and to take a bit of a risk, even if that doesn’t seem beyond other counties.

It also requires some open-mindedness. I was told of a case recently where a club put up footage online of a short piece of action from a game and were apparently requested to take it down.

That’s not an isolated occurrence from what I’ve heard. And yet as I write, I’ve just watched a super video put up by Naas GAA club showing Eamonn Callaghan’s highlights from his stellar performance against Sarsfields.

I really hope that stays online as they’ve obviously gone to the trouble of capturing and editing the action, adding interviews, and putting together a nice piece of film. Even for historical value, how marvellous for people to look back in years to come and have that resource available.

More of this please, but let all clubs play by the same rules with a focus on promotion of the games and winning those hearts and minds.

To save you some time the Sports Editor’s contact details are on page 2.