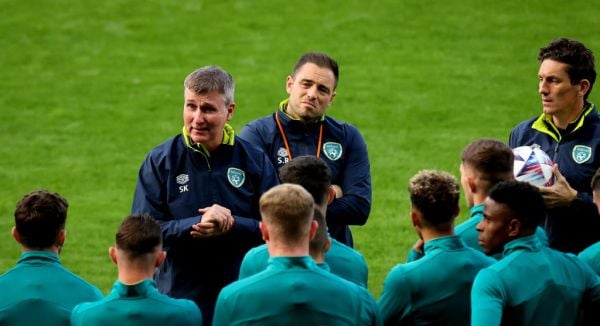 The Republic of Ireland face Scotland in the Uefa Nations League on Saturday night.

Here’s everything you need to know about the game…

Where is it, and where can I watch it?

The game takes place in Hampden Park in Glasgow with a 7.45pm kick-off. It will be broadcast on RTÉ 2 and Premier Sports 1.

How have the Republic of Ireland fared so far?

It was a bad start, with 1-0 defeats away to Armenia and at home against Ukraine. However, things have picked up for Stephen Kenny’s side.

The Boys in Green secured an impressive 3-0 victory against the Scots at the Aviva Stadium in June, followed by a 1-1 draw after a tricky clash with Ukraine.

Kenny’s men would have to beat Scotland and Armenia at the Aviva on Tuesday for any chance of topping the group and securing promotion, while they would also need other results to go their way.

If Ukraine beat Armenia at 2pm on Saturday, this chance will be gone.

A victory on Saturday would probably secure the Republic’s place at this level, but a loss could mean Tuesday’s clash in Dublin turns into a relegation play-off of sorts.

Andrew Omobamidele and Adam Idah are the notable injury absences for Ireland.

Other than that, Kenny has a strong pool of players to pick from.