IN this week’s Kildare Nationalist, in your shops now, we carried a preview of Sunday’s UPMC Kildare Senior Hurling Final in which we interviewed both team captains and we reprise those interviews here.

WITH all that he has achieved over the last few years, with club and county, you might think that the hunger for more might be waning in Naas captain, Brian Byrne. Not bloody likely! 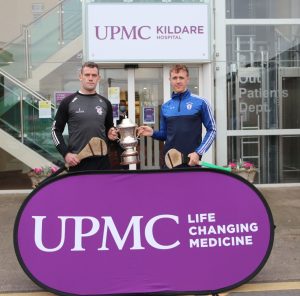 “I think anyone who wants to play sport or get involved in sport, there’s obviously the enjoyment side of it, but there’s the serious element towards it and if you’re anyway serious about it at all you want to be there at the end of the year and that’s where we are again thankfully,” Brian told the Kildare Nationalist at the photo shoot for the UPMC Senior and “B” Hurling Championship Finals at UPMC, Clane last week.

He doesn’t dwell on that famous night in Croke Park when Naas won the All Ireland Intermediate title either. “I think that’s put to bed for the time being. Whilst all of us are still playing it’s very much in the now and focusing on the next game. When we get older, and we retire we can look back on those days and celebrate those but for now it’s the next game.”

While Naas were favourites in every game this year they still had to go out and win those games. “I think that’s testament to the guys that we’re working with,” the Naas captain says. “We’ve got to ensure that we perform ourselves for every game and that’s, I know it sounds cliché and I keep reiterating it, but it’s the next game the whole time and we’ve just got to keep focussing to make sure that we’re playing the best that we can play.”

While the county might have been expecting another Naas V Celbridge Final until Maynooth upset that one, Brian Byrne was only concentrating on making sure Naas were in that Final. It was another brilliant semi final. Celbridge were almost there and Maynooth just held on tight. Unfortunately, we didn’t get to see too much of it given we were warming up for the next game. By all accounts it was a good hurling game, and we’ll just concentrate on ourselves towards this next game and make sure we’re the best that we could be.”

The hunger hasn’t diminished, we suggest. “No definitely not no, I’ve had a long enough time on the other side of these so I want to make it count as much as possible when we can get those wins, so we’ll keep trying anyway,” Kildare’s most decorated captain promised.

Leader Among The Young Ones

MAYNOOTH Captain, Mick Gillick, is proud of the fact that his club are now in a Final, after “struggling to get up senior for a few years. It could be argued that structures weren’t in the correct manner in the way they should have been for Kildare hurling in general, for the development in general, but we’ve got there now and we got there the hard way and I think the confidence in the group has kicked us into the stage of the competition we’re at now and really looking forward to it,” he told us at UPMC, Clane last week.

Gillick is convinced that their championship opener against Ardclough, which went to extra time, kickstarted their bid to claim a spot in the County Final. “A really good way to get our teeth stuck into the senior championship was to bring Ardclough to extra time and then manage to come out the other side of it. Ardclough a very, very proud club and we would have had a lot of respect for them and we still do, but it was also nice to come out the other side of such a hard battle.”

That victory probably made Maynooth battle hardened for the semi final joust with Celbridge the captain believes. “Yeah of course, every situation that unfolds is always going to lead onto something else, so you take the learnings from it, I know it’s cliché but you do have to take the learnings from it, it is a nice feeling to know that we can kick on and we can grind out a result and we can manage to put a team down when we kick into the last home stretch.”

Mick Gillick may be one of the elder statesmen of Maynooth hurling but he is a leader in a team mixed with youth and experience. “I think I’ve been playing adult hurling for 17/18 years and these lads (Harry Dunne, Cathal McCabe, David Qualter) are not much older than that. It’s a great bond between us all. I love all the lads, but what they bring to training is another thing. They’re good craic before training, they’re good craic after training, but then during training they mean business and they don’t take any guff off the auld lads either, they keep us going,” he says.

Reaching a County Final for the first time in 80 years is a remarkable achievement for Maynooth. “It’s huge, it’s massive, and there’s no point in saying otherwise, it is massive for the club,” Mick Gillick gushes. “We’ll get back focussed now, we’ll just focus on the game, but definitely not underselling the game. We’re going to focus on it as a game, and just try and get our plan in place, and that’s all we can do. Give an honest account of ourselves and leave absolutely nothing behind us, hopefully.”