WHO wants a homecoming in Kildare? The question was asked by Kildare’s Eric “Lilywhite Lightening” Donovan just moments after winning the EU super feather weight title following a 12 Round title fight, unanimous win over Frenchman, Kahlil El Hadri in the Europa Hotel in Belfast on Saturday night. 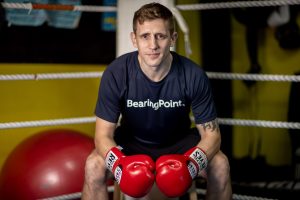 A what a battling performance it was by the Athy man in the fight which was shown live on TG4.

After working himself into the fight in the first three rounds Donovan took a lot of punishment and a count of eight in Round 4 but proving the warrior that he is he settled the fight down again before coming back strongly  in Round 6.

Rounds 8 and 9 belonged to the Kildare man as El Hadri looked for the knock out punch but was continually hit on the counter. Donovan again suffered in Round 10 but wouldn’t wilt and battled back magnificently in the remaining rounds to impress the judges and frustrate the Frenchman.

Speaking to TG4 immediately after the fight Kildare’s new EU Champion, surrounded by his wife, Laura and sons, Jack and Troy, said of his battle, “someone once told me that when you are going through hell the best thing to do is to keep going.”

Paying tribute to his opponent an emotional Donovan said, “What an absolute warrior, he punches like an absolute mule. I have never been hit as hard but I just kept telling myself suffer now and live the rest of your life as a champion. I knew I had the skill, he had the strength, he had the power and that ferociousness in each hand but I had the skill, the footwork and speed.”

Speaking of the future the new Champion said, “I really don’t know where I can go from here. I always said that this would be my Everest, anything else is a bonus. I’m happy to get a second chance at life, a second chance at my boxing career, who knows, a homecoming in Kildare,” he declared to a rousing response from the packed Europa Hotel in Belfast.