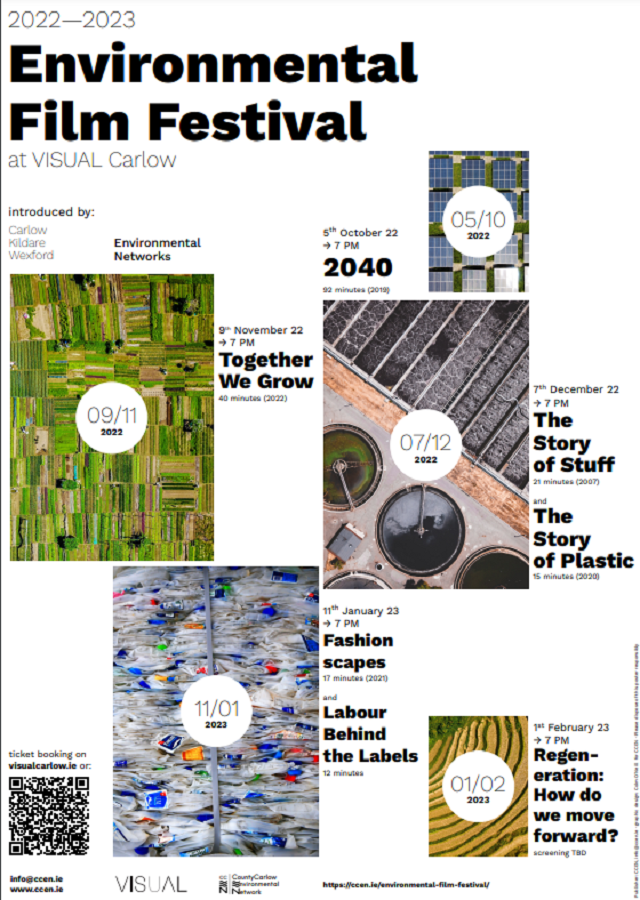 A poster for the film festival

Carlow County Environmental Network are partnering with their counterparts in Kildare and Wexford to screen a series of environmental films in the Visual Carlow.

The series will start on 5 October from 6.30-9pm and they’re inviting all community groups interested in environmental issues to attend.

The previous series in early summer was well received and was witness to great discussion and debate. The series will start with 2040, an upbeat film introducing the environmental issues facing us all.

The scale of the environmental crisis humanity is facing can feel overwhelming. Over the course of five months Carlow, Wexford and Kildare environmental networks hope to break these issues down through the media of film.

Each film night will tackle a theme in an attempt to provide insight into the bigger picture. Their first film will tackle climate change, followed by the issues of feeding and clothing ourselves as well as the waste we generate. Their final night in February will be a family friendly event where people can discuss any issues raised during the other nights.

Each night is themed, and time has been allowed for chatting about solutions, or just about how people feel about what they learned. The aim of the evenings is to break a huge problem into manageable pieces and tackle the elephant of environmental crisis one bite at a time.

The Visual Carlow is wheelchair and buggy accessible. The bar will be open serving tea, coffee, alcohol and snacks. You can book your free ticket through visualcarlow.ie.