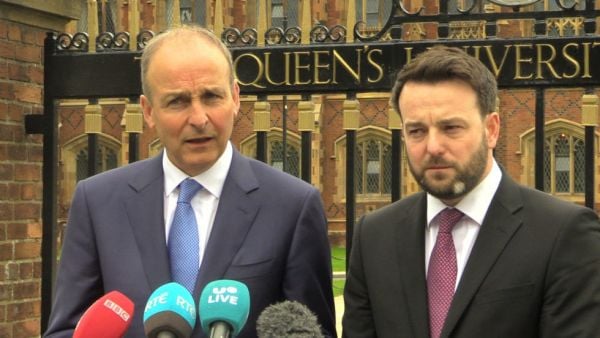 Taoiseach Micheál Martin has said he cannot confirm a report that the SDLP has officially ended its partnership with his party, Fianna Fáil.

The Belfast Telegraph reported that the formal partnership between the two parties had been ended after three years.

The parties first announced a link-up in January 2019 when it was hailed by SDLP leader Colum Eastwood as the birth of a policy partnership which he said would build for a better future.

After the report that it had been ended, Mr Martin said he had spoken to Mr Eastwood on Thursday.

He said: “Well, I can’t confirm it and the SDLP certainly are not confirming it to us.

“I spoke with Colum Eastwood this morning, and we will continue to work with the SDLP.”

He said he believed the SDLP would clarify the issue later.

An SDLP statement did not confirm whether the partnership had been ended.

A spokesperson said: “The SDLP is determined to create a social democratic new Ireland that meets the needs of all the people who share our island.

“We have worked intensively and constructively with Fianna Fáil over the last number of years to advance that goal and we are proud to have helped shape the priorities of the Shared Island Unit which is delivering on projects that bring our people closer together.

“Colum Eastwood and Micheál Martin continue to have regular discussions about the future of this island and the challenges we face.

“That will continue and we will continue to work closely with our friends in Fianna Fáil and with every party in the democratic tradition on this island that is determined to deliver a new Ireland for everyone.”

The link-up between the two parties in 2019 led to one of the SDLP’s most high-profile members resigning the party whip in protest.