AS part of our preview of the Joe Mallon Motors Kildare SFC Final in this week’s Kildare Nationalist, out now or online at www.kildare-nationalist.ie, we spoke with both captains, Brian McLoughlin, Clane and Eoin Doyle, Naas.

BRIAN McLoughlin was one of the young guns who won the U20 All Ireland back in 2018 but he sees Sunday’s County Final as “little bit more special now.” 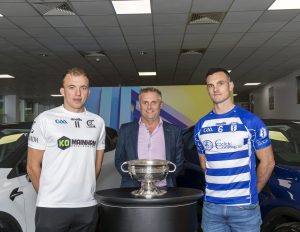 “Obviously doing it with the lads you grew up with is probably a dream come true. I was looking at a couple of years ago after the 20s and Tony Archbold getting to the Final. I remember seeing him walking around the parade being jealous of him,” the Clane captain tells us.

Brian McLoughlin sees the appointment of Manager, Tom Cribbin, and his Backroom Team as key to Clane’s appearance in Sunday’s Final. “I think they’ve really driven on the standards and set a lot of belief within the group. That’s what really mattered; they believed in us from the start, probably when we didn’t even believe in ourselves as much as we should have. Now we’re all singing off the same hymn sheet which is brilliant,” he explains.

Clane have won many admirers during Championship ’22. “We just play our own brand of football I think that’s probably why people like us. We play an attacking free-flowing game of football as Tom always says, trying to get the ball in as quick a possible, so I think that’s just an attractive style and people obviously like looking at that.”

This style suits Brian McLoughlin. “As a forward it’s brilliant, it’s a dream come true. The last thing you want is delaying the ball and then you have four or five sweepers back there.”

“If we can move the ball in as quick as possible, we’ve a better chance of scoring. So, we just try and do everything as fast as we can and as best as we can and just go from there,” he adds.

Like his Manager, the Clane captain sees the narrow win over Raheens in the Preliminary Round, as the “turning point of the year” for his team.

“I think getting over the line that day was a huge mental edge for us, and it really gave us a great chance in that group as obviously we were coming up against Celbridge and Sarsfields and we knew they were going to be a tough test.”

“Whatever happened against Celbridge it just all clicked, and the energy was just brilliant, and then obviously Sarsfields as well we knew we’d be up against it.”

“I suppose we caught Celbridge maybe on the hop a little bit, they probably weren’t expecting us to come out like that, and then obviously against Sarsfields we knew they were going to be well prepared for us, but we battled with them.”

“I think we’ve learnt a lot against Sarsfields, I think that’s what brought us into the Athy game, knowing if we could match Sarsfields physically we’d have no problem matching Athy, luckily enough then we got over the line obviously.”

Goals have been important to Clane, McLoughlin believes. “Luckily this year we’ve been getting goals at the right time. Sam Reilly got a brilliant goal the last day; it was really well worked, and a couple of the other lads got crucial goals at crucial times.”

Naas have impressed the Clane captain. “Even when they haven’t been playing as well as they liked, they’re still grinding out results, they’re still getting wins all the time, which just shows how good of a side Naas really are,” he contends.

The buzz around the town and the club excites Brian McLoughlin. “We had a night in the club after the semi final and I heard Fintan Doran and Dicky Dunne were down at 9 o’clock the next morning putting the bunting up.”

“We got a video before the semi final from all the underage teams in Clane supporting us, so it’s just brilliant and it’s everyone in the whole community. The likes of Donal O’Donovan who’s 80 years of age, I was walking into the GAA on Saturday night, and he was coming out after having a pint in there. It’s brilliant to see,” he says.

All the injuries are behind Brian McLoughlin now. “Yeah, Thank God. A few niggles here and there throughout the year, but I haven’t missed a game all year which is brilliant and touch wood the next few days go well as well,” he concludes.

NAAS captain, Eoin Doyle, is enjoying a summer, injury free. He is also free from the extra burden of Player/Manager, a role he fulfilled with the defending champions with great success last year, winning a county title before finishing just short in the Leinster Club Football Final.

Kildare’s former captain has had to manage his injuries and training for some time now. “It was probably always a bit of that for me in fairness. I always had a lot of groin issues so just keeping an eye on the load I was doing, week to week, was always kind of important and even with that it probably didn’t always work. But it’s just about being smart about that as you’re going, “ Eoin Doyle explains.

The Naas captain is delighted to be back in another county final after winning in 2021 for the first time in 31 years. “It’s brilliant to be back there, there’s no two ways about it,” he says excitedly. “It’s brilliant to be there, to have the opportunity to go at it again and to see where we can get at the end of the game; it’s not going to be worth a whole lot unless we can go and win the game but look Clane will be saying the exact same thing and that’s the way it goes, that’s the beauty of sport as they say.”

Eoin Doyle wouldn’t necessarily agree that Naas know how to win matches now. “It’s maybe a combination of having a small bit of confidence there that has maybe come from last year, that has helped, but all the games have come because of hard work and the effort that’s gone into them. There’s no points on the board before the ball gets thrown in because you did something last year or because you won the game previous to that, it’s an even keel and it will be an even keel again next Sunday too,” he contends.

Having watched Naas and Clane contest minor and U21 Finals over the last number of years, Doyle sees both teams as “young and confident and vibrant and energetic and it’s good,” but the captain sees no point in trying to pre-empt how Clane might set up.

“I suppose, what we try and do is to just play our game and play what’s in front of us and every single game takes on a life of its own and takes on new ways of playing and new setups and all the rest of it, so we’ll just try and play our game and try and do it to the best of our ability and see where that gets us,” he explains.

The success of Naas as a club is something that pleases Eoin Doyle, who recently took up a Vice Principal role in Mountmellick, but he warns that there are no guarantees in the game. “If you’re not going to enjoy it when you have a successful year last year, when can you enjoy these things,” he says.

“We had the hurlers again then last week got over their game, so that was brilliant again and it was just a joyous moment for them and for the club again to take stock and realise that they achieved something again.”

“It is on a positive note but that doesn’t guarantee you anything going forwards, Clane are coming to win this game, they’re a confident young team full of energy and have come through an awful lot of battles in their championship this year as well, you know, Athy, Sarsfields, Celbridge, Eadestown, all tough teams and they’ve come through that and they’re battle-hardened, and some might say they’re coming in a small bit under the radar but they’ll be confident, they’re young, they’re energetic and they’re just going to go at it and it’s up to us to try and do the same.”

Eoin Doyle pays tribute to his new manager, Joe Murphy. “Ah Joe is great, he’s come in and he’s very much fitted into the whole club, in fairness to him. He has fitted in seamlessly and we’re enjoying the whole setup and that’s a credit to him and his team and what they’re bringing to it,” he says.

“Getting to a county final is one thing but going out and then putting in a performance is another kettle of fish altogether. That’s what we’ll be looking to do, and as I said Clane will be looking to do the exact same thing, and that is the beauty of sport,” the ever cooperative Eoin Doyle concludes.