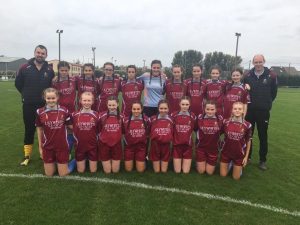 The Leinster stars were eager to impress and Jessica McNulty had the first clear cut chance of the game midway through the first half. The youngster released an effort from the edge of the box but the Kenmare number one, Rebecca O’Sullivan was well positioned to deal with the danger.

Seconds later, the Newbridge girls saw the ball crash off the Kenmare upright, no VAR to see if the ball crossed the line, a reprieve for John Granville’s outfit as the sides went in scoreless at the break.

The only goal of the game came seven minutes into the restart as a defensive error from Kenmare provided Donnellan a wonderful opportunity from close range and she pounced to slot home.

Pobalscoil Inbhear Scéine pressed forward at every opportunity and had two fabulous chances to equalise late on but the balls across the box went unpunished.

A well deserved victory for Holy Family Secondary School as they saw the game out. They now look forward to a first National Cup Final which will see them pitted against an experienced Presentation College, Athenry in this season’s decider. Details for the final will be announced later.