KILDARE’S unbeaten lightweight, Gary Cully, is full of confidence as he steps into the ring for the first time with Matchroom on the Katie Taylor card in Ovo Arena in Wembley at 7pm on Saturday night to take on the likewise undefeated Frenchman, Jaouad Belmehdi (16-0) as he edges a step closer to some title challenges in 2023. 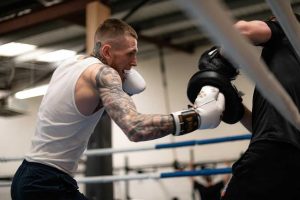 The week in London has gone well for the Naas man. He had a public  workout on Wednesday, a Press Conference on Thursday and the Weigh -in on Friday.

The man they call The Diva, spoke with confidence on Thursday about his chances on Saturday night and his hopes for 2023 including the possibility of fighting on the Katie Taylor card in Croke Park, should that come to fruition.

“I believe I put on a big performance back in March in beating the former World Champion, Miguel Vasquez, and I want to move forward towards World titles in 2023 so this is the right step in doing so,” he said in response to a question from promoter, Eddie Hearn at the Press Conference on Thursday.

On the suggestion that he is just one or two fights from putting himself in line for a mandatory position for a World title against such names as Angel Fierro, Cully said, “These are big names, big fights and where I want to be. Saturday is just another step for me and I have to make that step before I’m in the fights with these big names.”

“After this fight on Saturday we’ll be looking towards the names of Fierro and other names in the lightweight division and I’m excited to be a part of it but first we have to do the business on Saturday night.”

Responding to Hearn’s question about a title fight in Croke Park if Katie Taylor fights there next year, the Kildare man said, “A big shout out to Katie she’s the one who has been paving the way for fighters like myself since the amateur days to the pro ranks now. It’s my first time to share a card with her. It’s a big honour for me to share the card with her.”

“It’s been a vision of mine since I’ve been a kid to be able to see that as a possibility (World Title fight in Croke Park). Katie has been leading the charge over the past ten years. To share a card with her in Ireland would be history for Ireland, it would be special.”

“I believe it’s a possibility now and it looks like it can happen so hopefully the Irish get behind us and we can fill Croke Park next year,” Gary Cully concluded.

We wish Gary and his team every success on Saturday night.