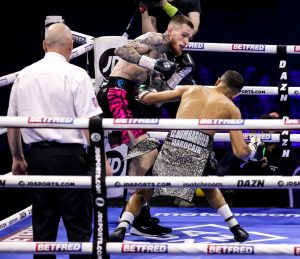 Fighting on the Matchroom Card for the first time, on the undercard to the Katie Taylor fight, Cully finished the fight against previously unbeaten Jaouad Belmehdi inside 35 seconds or Round 1 when a powerful left put the Frenchman to the canvas.

Although Belmehdi got up immediately it was clear that he was in distress. The referee began the mandatory Count of 8 but abandoned it immediately when he realised that the stricken Frenchman was in no fit state to continue.

Cue wild celebrations in Gary Cully’s corner with his coaches Pete Taylor and Niall Barrett as well as the many Irish fans ringside who were there to see the Kildare man and later Katie Taylor.

This win, and the manner of it, puts Cully in a great position to fight for a World Lightweight title in 2023, perhaps on a Katie Taylor card in Croke Park, something that was hinted at by promoter, Eddie Hearn of Matchroom, in the prefight Press Conference on Thursday.