After The Storm By Damian Lawlor – A Review

IN this week’s Kildare Nationalist we carry a review of Damian Lawlor’s latest book, his 8th, After The Storm, stories of survival. resilience and come-back from the Covid 19 pandemic with the GAA very much centric to it.

The Kildare Nationalist is in your shops now or online at www.kildare-nationalist.ie

THE last few years have been busy ones Naas residents, the husband and wife team of Damian Lawlor and Ruth Bailey. 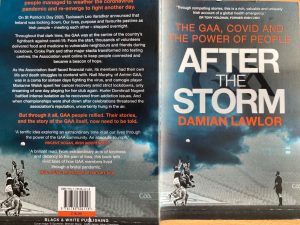 Ruth established Vigo Health in 2021 while husband, Damian, the well known RTE Broadcaster and Author has just completed and published his 8th book, After The Storm.

Add in three kids, Jamie, Chloe and Aaron, all playing members of Naas GAA where Damian coaches the U10 camogie team and is a member of the Juvenile Committee and it’s a case of give a busy family another job.

Hot on the heels of his last successful publication, When The World Stops Watching, this is book number eight from the Tipperary native. “When I was younger I set a target of ten but it’s increasingly difficult to get to that, maybe eight could be it,” he tells us.

After The Storm is a series of stories about the story that surrounded Covid 19 in Ireland. In effect the book takes the numbers that we were all used to and dreaded out of Covid and puts human faces on the struggles and on the emotions within the dreadful pandemic. In particular the book tells of how centric the GAA was to survival during the past three years.

“I heard all these stories from delivering messages to helping the vulnerable, to David Brady ringing the isolated. There was camogie player, Marianne Walsh, down in Waterford, she was a nurse, she got diagnosed with cancer, she had to go through all of Covid getting the chemo. What kept her going was playing camogie again, and six months later she won a camogie championship and got Kilkenny Camogie Player of the Year.” Damian Lawlor says.

“Niall Murphy up in Antrim, a barrister, spent 16 days on a ventilator in a coma fighting for his life, he came out of it, the first thing he’s doing is fighting for better conditions for nurses up there. So everywhere I looked, there was human interest stories,” he added.

Of course here in Kildare we had Johnny Doyle, the Moorefield kitman, a postman, who used to deliver chemist supplies and messages on his round and won an award for it.

“The book is about survival, resilience and come-back,” Lawlor says. “It’s about positivity, the human interest, the battles, and the come-backs. It’s mostly got to do with people and clubs and teams, and the GAA administration side, because we were only 14 weeks away from not having a championship for only the second time in the GAA’s history,” Damien recalls.

“It boiled down to John Horan, then President of the GAA, getting a phone call from the Minister of Sport Jack Chambers, 14 weeks out from Christmas, pledging the €15m for the funding to go ahead. Only for that it was gone. People think the GAA have loads of money, they made a €75m profit the year before, but 93% of that goes straight back to clubs and grassroots so they’re not cash rich,” the author says.

“David Brady, the former Mayo footballer, really got me going, in terms of his stories,” Damian Lawlor says. “He rang one guy who had spoken to nobody in two weeks, and then all of the stories of the people that Brady contacted come through in the book as well, and there’s some really really poignant stories there in the book.”

Another example I cover in the book,” Lawlor says, “was the Irish people in the New York GAA, lots of Kildare people out there in New York. How the New York people look after the undocumented Irish people out there, there’s a huge amount of undocumented Irish who pay tax and pay health insurance but weren’t covered by anything because of the legislation that Trump had. And New York GAA effectively saved New York families from going under, losing their houses, losing their homes, and paying for their dinners, paying for their meals. A lot of the New York managers and teams and selectors made hot dinners and dropped them down to the local hospitals for the nurses and doctors. So right around the world people were doing this, and those stories just struck me.”

The book also covers the decision of the GAA to cancel some remaining county championship finals because of breaches of regulations during championship celebrations and of course the breaches by a number of high profile county teams which didn’t go down well with the public or the GAA hierarchy.

After the Storm, written by Damian Lawlor and published by Black & White Publishing, is in all good bookshops now and is a thoroughly fascinating read on how ordinary people, not only coped with, but survived Covid 19