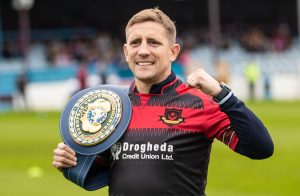 Taking to social media the recently crowned EU Champion said, ” After a lot of consideration with my family, and team I’ve decided to hang up the gloves. Some of the best experiences and memories of my life have come from boxing. Now after 30 years in the game, I am finally content with my achievements in the ring.”

From the St Michael’s BC in Athy, Eric Donovan was five times Irish Amateur Champion and he won bronze medals at the 2009 EU Championships and the 2010 European Championships. The 37 year old retired from boxing but then turned pro in 2016 where he had a 16-2 record. He was due to fight Italian Mario Alfano in May of last year for a European title but he had to cry off because of a rib injury.

Donovan’s dream finally became a reality in September when he got the decision against Frenchman, Khalil El Hadri to claim the EU featherweight title after a thrilling and bravely fought contest in the Europa Hotel in Belfast.

Speaking on social media on Friday night, the EU champion said, ” My professional career was one of redemption with the EU European Title being the crowning moment and a night I’ll never forget. So many people helped me along the way, coaches, cut-men, sparring partners, professional support personnel, sponsors and all my supporters.”

“Whether it was for one fight or for several, I will be forever grateful for your support and could not have done it without your help,” he added.

Donovan paid a special tribute to St Michael’s BC and his coach/mentor, Dom O’Rourke, as well as Mark Dunlop, Packie Collins, Kenneth Egan and Leonard Gunning, from his professional career.

The Athy man also thanked his ever supportive wife, Laura and his three kids, sons, Jack and Troy, and newly born daughter, Saoirse.

Quoting lines from the Labi Siffre song, Eric Donovan concluded, “The higher you build your barriers, the taller I become. Something inside so strong.  Looking forward to the next chapters. Lilywhite Lightening.”

Sports Editor: Eric Donovan brought the people of Athy, Kildare and Ireland on an incredible journey and we lived the dream with him. That dream became a reality for Eric and all of us in Belfast six weeks ago.

Throughout his career Eric Donovan gave his all to boxing and to preparing for his fights. He overcame his challenges inside and outside the ring to leave at the top.

Eric always dealt with the media, either collectively or individually, with the greatest of respect, cooperation and understanding. Boxing was made all the more brighter by his presence and his absence from the ring will make it a little less bright but the legacy of Eric “Lilywhite Lightening” will remain as a shining star in the boxing world.

Thanks for bringing us on your journey, Eric. Enjoy the rest of your life now. Pat