A superb tally of 3-5 from centre half forward, Carl Lennox (Kill) helped All Ireland Champions, Naas CBS to a comprehensive victory over Marist CBS in Round 2 of the Leinster Schools Senior Football A in Naas GAA on Tuesday. 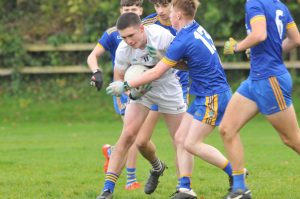 Lennox was ably assisted by Ryan Sinkey (Naas), who contributed 0-6 and Stephen Kelly (Sallins) who got the CBS opening goal 19 minutes into the second half.

As well as those scorers Naas had strong performers in Eoin Lawlor (Naas), Finn Ryan (Kill) in defence as well as Austin Brennan (Blessington) and Cian O’Reilly (Raheens) in midfield.

Athlone had an outstanding performer in full forward, Bobby Nugent, who contributed five of his team’s seven points.

With the home side leading 0-14 to 0-6 with 10 minutes left the goal floodgates opened. Callum Barrett (Ballymore Eustace) set Stephen Kelly up for the opening goal and within a minute Lennox added a second.

Barrett had a penalty saved by substitute keeper, Kailin Blessing, at the expense of a point, for a foul on himself on 53 minutes but he set Lennox up for his second and Naas’ third goal on 57 minutes and Barrett was the provider again for Lennox’s hattrick a minute from time as the Westmeath school had no answer to the clinical All Ireland champions.

In another Round 2 game Scoil Mhuire, Clane drew 0-13 to 1-10 away to St Benildus College, also on Tuesday afternoon.