NAAS RFC will look to continue their recent form and winning run when they entertain St Mary’s College in the Energia All Ireland League Division 1B on Saturday with the Kick Off in Forenaughts at 2.30pm. 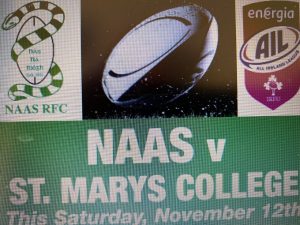 Evidence of the Naas good form was enhanced when they travelled to the Mardyke to take on table toppers, UCC on Saturday last and they came away with a 26-21 victory. Tries came from Bryan Croke and  Andrew Osborne (2) with Croke on form with the boot as well.

Following on from the victory over Malone in the previous round, Naas have recovered from a nervy start to the League to climb up the Division 1B table. All this happened without the likes of Craig Ronaldson and former international Sean O’Brien, both injured, but the response and form from the likes of Croke, Osborne, Charlie Sheridan, and Henry Smith in a team that is superbly led by captain, Paul Monahan, has proven to be extremely positive for the club.

A big local support is expected at Forenaughts on Saturday as Naas look to move further up the table against a St Mary’s College with whom there are always tight and entertaining games.