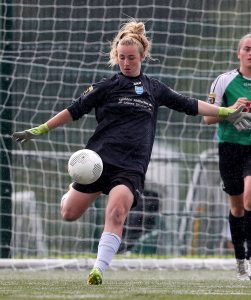 Following the disbandment of the Women’s Football Association of Ireland the administration of the women’s game in Leinster now falls fully under the remit of the LFA and for the first time ever all women’s Leagues in Leinster are now affiliated to one Provincial Association.

The LFA decided to re-launch it’s Inter League Competition and this season sees six Leagues enter with a chance to win the coveted trophy.

The Kildare League have entered following their recent participation in the FAI Angela Hearst Inter League Trophy, which they won, finishing unbeaten in their group, but still failed to qualify for the knock out stages on goal difference.

The team is managed again by Sallins Celtic’s, Wayne Long, who comes to the post with a wealth of experience. In his early career he managed at underage level at Booth Road before moving to take up a position at Naas United U12’s. Wayne has been involved with Sallins Celtic for the last number of years and is the current Manager of their men’s senior team; he also manages their U16 girls teams and assists with the Women’s team who are current KDFL League and Cup champions.

In his latter playing years in Kildare Wayne Long lined out with Johnstown United and was the recipient of the KDFL Division 3 Player of the Year Award in 2015. He is no stranger to the KDFL both on and off the field. He is currently player/manager with Cherry Orchard’s senior side playing in the LSL.

They will be a formidable force coming into the game surely as favourites. However these competitions can throw up some amazing results and the KDFL are confident that the Kildare women will give a good account of themselves.

It is an new look squad for this competition comprising of players from no less than six of the League’s nine clubs with lots of youth mixed with experience.

The KDFL wish Wayne, his staff and all the players the very best of luck.

The KDFL Women’s team will have little time to rest following Saturday’s game with some high profile friendlies organised ahead of the Series 2 game versus the Wexford Women’s League scheduled for two weeks time.