FOLLOWING a meeting of the Kildare GAA CCC on Wednesday night, the Whitewater Shopping Centre U23A Quarter Final between Naas and Sarsfields, has been awarded to Naas under Rule 7.2, premature ending of a game. 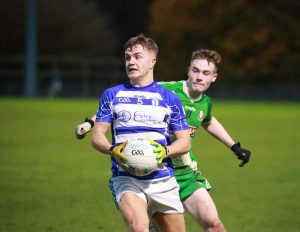 Action from the Whitewater Shopping Centre U23A Football Quarter Final, Naas V Sarsfields on Saturday, which ended in a draw but was abandoned before extra time was played Photo: Sean Brilly

The game in Naas on Saturday afternoon ended in a draw but Referee, Niall Colgan, abandoned the playing of extra time after, it appears, issues arose around the presence of a Sarsfields mentor on the sideline for the extra time after being dismissed from the sideline during normal time.

It is understood that Sarsfields have objected to Wednesday night’s decision of the CCC and Kildare GAA are now awaiting a next step from the club.

Clane wait in the wings to play the semi final, which would have been due to have been played this weekend along with the other semi final between Maynooth and Raheens which is fixed for Newbridge at 2pm on Saturday.