HOLY Family Secondary School Newbridge, the new kids on the block, suffered extra time heartbreak when they were defeated 2-1 after extra time by Presentation College Athenry in the Final of the FAI First Year Girls National Cup Final played at Athlone Town Stadium on Tuesday. 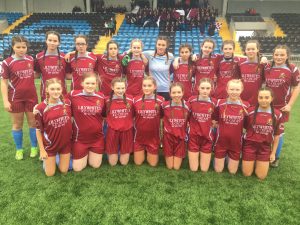 In a scoreless first half the Newbridge defence were outstanding and denied attempts at goal from the Westerners who always looked dangerous through Mollie Noone’s set pieces.

Although going behind six minutes into the second half when Ciara Mullins scored for Athenry, Holy Family fought back immediately and drew level by the 36th minute when team captain, Ella Donnellan, rounded Lauren Kearney in the Athenry goal to finish to the net.

Neither side could make the breakthrough for the remainder of normal time and the intense final went to extra time.

Just minutes into that extra time Mullins again pounced for Presentation College and she slotted home to give her side the lead.

Holy Family, well coached by teachers Eugene Beggy and Karl Mulvey, fought hard to find an equaliser but Athenry were able to see the game out and claim the victory.

Holy Family SS Newbridge can be proud of their first year involvement in schools soccer. The appeared in two Leinster Cup Finals losing a provincial final to Loreto Secondary School, Kilkenny but they defeated Presentation SS, Wexford 3-1 in their First Year Cup contest.

There’s a bright future ahead in schools’ soccer for the Holy Family School, surely.