ST COCA’S AC’s O’Cuill has been included in an exciting Irish team which has been selected for the 28th edition of the SPAR European Cross Country Championships which takes place at La Mandria Park, on the outskirts of Turin, on 11 December 2022. 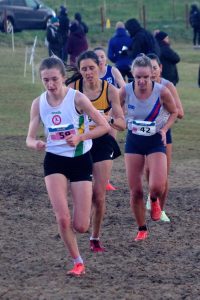 Aoife O’Cuill, St Coca’s AC, finished 4th in Donegal on Sunday last and has now been included on the Irish U23 team for the Europeans in Italy next month. Photo: Perri WilliamsAs reported in Tuesday’s Kildare Nationalist, O’Cuill had an outstanding 2021 season and she returned to form by winning the Leinster Novice in Bellurgan, Louth, last month and on Sunday last she finished in 4th place in the Ladies U23 race and in 16th place overall at the All Ireland Cross Country Championships in Rosapenna, Donegal. While the 4th place finish did not guarantee her a place on the Irish team for the Europeans the selectors have seen enough of her to include her on the team for Italy next month.

O’Cuill has been included on the U23 team which will be spearheaded by Sarah Healy (UCD AC), national senior champion from Sunday last as well as Danielle Donegan (UCD AC), Laura Mooney (Tullamore Harriers), Jodie McCann (Dublin City Harriers) and Niamh O’Mahoney (An Ríocht AC).

The SPAR European Cross Country Championships is one of the main seasonal appointments of the European Athletics calendar and is hosted by Italy for the fourth time after the editions of Ferrara in 1998, San Giorgio su Legnano in 2006 and Chia in 2016. Piemonte 2022  follows the edition of Fingal-Dublin last December which saw Ireland claim 3 medals (2 team and 1 individual), topped off with team gold in the men’s Under-23 race.