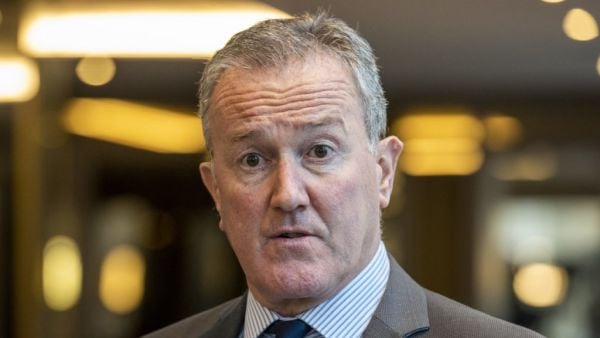 Mr Heaton-Harris made a budget statement on Thursday in the absence of a Stormont Executive.

The executive has not been reformed since the last Assembly election in May due to DUP protest action against the Northern Ireland Protocol.

Ministers with limited powers remained in post until the end of October, when the deadline to form a new executive passed.

Sinn Féin MLA Conor Murphy said the collapse of Stormont had left departments struggling to control spending and a one-year budget set towards the end of the financial year.

“This is hugely damaging for public services, particularly the health service which desperately needs financial certainty,” he said.

Mr Murphy also criticised a lack of additional rates relief for businesses and queried whether enough had been allocated to allow pay rises for public sector workers.

“It is not clear from the British Secretary of State’s announcement what is happening with public sector pay. I will urgently be seeking clarity on this matter,” he said

Alliance Party deputy leader Stephen Farry reacted to the statement by warning there were difficult times ahead in terms of public spending in Northern Ireland.

Mr Farry described as “regrettable but inevitable” that it fell to the Secretary of State to set the budget.

He said Mr Heaton-Harris’s statement provided a “basis for the continuity of public services”, but with Stormont collapsed, there was “little scope for strategic decisions to be taken to reform public services to make them more sustainable”.

“The future of resources for the Block Grant in the years ahead, as outlined in last week’s autumn statement, is to flatline,” he said.

If NI parties disagree with the Budget allocations set out today, they should restore the Executive to consider and revise the position I have set out today. pic.twitter.com/zVK6NL787e

“Some very difficult times are ahead in terms of public spending here.

“Regrettably, the opportunity to fix the roof when the sun was shining hasn’t been taken in recent years.

“We should be much further on in reforming public services and tackling the costs of a divided society to free up resources for reinvestment. Options on revenue-raising also need to be considered.

“Those considerations are now going to have to be accelerated in a much more difficult governance and financial context.”

“A disastrous mix of fiscal incompetence and political recklessness has delivered us a Tory budget that will lead to stark cuts to education and other areas of public spending.”@columeastwood https://t.co/sR4JbOA1DN

“The statement from the Secretary of State reflects that. We will take our time to analyse the detail and implications of the statement, but it is a clear example of why we need to see the executive back up and running,” he said.

“The challenges caused by soaring energy costs and inflation are affecting every home in Northern Ireland.

“Local ministers being able to provide a multi-year budget will be vital in producing solutions that work for people in Northern Ireland.”

SDLP leader Colum Eastwood blasted a “Tory budget that will lead to stark cuts to education and other areas of public spending”.

“The DUP has handed Chris Heaton-Harris the power to make these decisions. And the spending decisions of other ministers have given him the cover to make cuts to critical areas of public spending,” he said.

“The transparent threat to introduce new revenue-raising measures in the absence of agreement to form an executive will lead to further hardship for ordinary people who are already being hit again and again with food, fuel and energy bills that are smothering family finances.

“Further pain is not inevitable, power that should never have been given to him can be removed from the Secretary of State.

“But it requires the DUP to acknowledge that the consequences of their protest are now inflicting unsustainable pressure on ordinary people, and on the education of our children.

“People across Northern Ireland can no longer afford to pay the price for this political selfishness.”