IRELAND’S senior women’s basketball team will play the Netherlands in the FIBA Women’s EuroBasket Qualifier in the National Basketball Arena on Sunday evening next, (5.15pm) and four Kildare players have been included in the squad by head coach, James Weldon, for the game. Experienced players included are Monasterevin’s Claire Melia (Trinity Meteors) as well as Leixlip Amenities Liffey Celtics pair of Áine O’Connor and Sorcha Tiernan who returns after injury. 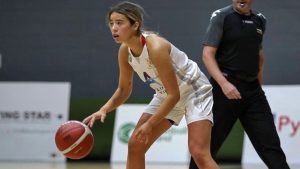 Ciara Bracken of Leixlip Amenities Liffey Celtics in line for her senior cap for Ireland against Netherlands on Sunday Photo: Martin Doherty

Also included in the squad and likely to earn her first cap is 21 year old Ciara Bracken from Leixlip Amenities Liffey Celtics who has come up through the underage international ranks to be included in the senior squad for Sunday.

“We’re all kind of sport mad,” Ciara Bracken told us this week. “My Dad, Paul, coaches hurling and my Mam, Yvonne, coaches basketball, she’s the reason we started in basketball,” Ciara says. “My sister, Erin, played basketball growing up and coaches now. She wants to coach at a high level and has been involved in international programmes and is with men’s super league team now. My brother Cian was with Kildare hurling team this year but has now gone travelling to Sydney while my little sister, Kelly, plays basketball and camogie. Her camogie team just won a Division 1 championship last week and she’s with myself in a super league panel and she was away with the under 16 Irish team this summer.”

Sports mad, maybe, but talented too.

Ciara Bracken started with Liffey Celtics Academy when she was just six years old and has now progressed to the first team.

Speaking of her Leixlip Amenities Liffey Celtics team this season Bracken says, “We had a bit of a rough start but in the last couple of games we seem to be getting back in the swing of things now. It was tough, we had a new coach, and we had a couple of injuries; half the team is very young so it’s quite a transitional period, but things seem to be clicking now.”

“The young girls are great, there’s some brilliant talent coming through, but they wouldn’t be used to that level yet. They’ll get there,” she adds.

Erin Bracken started at international level with the U15 Programme when she just turned 14 and later moved into U16 level. “We travelled to a load of countries and eventually went to the European Championships in Macedonia under Andy Gill. So that was kind of my first go round. That was actually, believe it or not, the last time I played for Ireland at a competitive level. I was involved with the U18 3V3 a couple of years later and then I was on the U18 squad, but I had to drop off myself as I was moving away.”

“I had to make a choice between whether to go to summer school in the States or whether to go to European Championships, so that was kind of the choice I made. That was when Tommy O’Mahony had them. I do wish I got a chance to play then, Tommy seems like a great coach, and it was a successful tournament so it would have been nice to play in that one, but it was just unfortunate that I couldn’t.”

“I hadn’t played basketball the way I’d been enjoying for a while, I’d been away. I was in Connecticut in University; it was an amazing experience I don’t regret one bit going, but when I came home I was kind of looking forward to playing home basketball again and enjoying my time. So just last summer I hadn’t had a season yet and I just wasn’t in the headspace to go off and represent Ireland,” Ciara tells us.

Bracken was due to be involved with the Irish U20 squad last year, but an ankle injury kept her off the court for about three and half months. I’m only back now a couple of weeks but I’ve been kept in the loop. Then I got the phone call from James (Weldon- Head Coach) there a couple of weeks ago to

tell me that they were bringing me forward, and I had my first official training with them there two weeks ago,” she explains.

“I was pretty shocked to be honest. There’s some great talent out there, and particularly because I was coming back from an injury and I don’t really necessarily feel like I was where I was a couple of months ago. I was delighted, chuffed with myself, but pretty shocked,”

Ciara Bracken will go into camp on Wednesday and will remain there until after Sunday’s game but she is delighted to have her two team mates, Sorcha Tiernan and Ȧine O’Connor in the squad with her. “I’ve grown up with the two girls, Sorcha was there when I started on my first day in the Celtics, she’s been there ever since. I look up to Sorcha, she’s not that much older than me and I would have played with her growing up, but she is a role model. And then Aine, she coached me growing up. I won my U16 and U18 all Ireland’s under her, so to get to play with her and to be able to do it at this level, I’m delighted to have them there,” Ciara says enthusiastically.

Of another Kildare player, Claire Melia, Bracken says, “she’s one of the best the country has ever seen.”

She is delighted with her senior call up. “Representing your country at any stages, it’s brilliant, but a cap at senior level, I don’t know if it’s something I ever thought I could do.” She’s also looking forward to facing up to the professional players from the Netherlands. “You don’t get that competitiveness in the leagues in Ireland. As much as the leagues in Ireland are growing, it will be some experience to get to play against these players, it’s their job, they live and breathe basketball, they’re professionals,” the Leixlip player says.

Bracken would be tentative about turning pro herself. “God, I don’t know, I’d love to, but it’s another level out there. If I thought I was capable I think I’d love to pursue it. It would take me a lot of hard work.”

“I think this year and next summer I’d have to put everything into basketball. There’s a lot of things I need to work on, it’s only my second year in the super league so there’s a lot of experience I need to gain, and as much as I think I’m getting better as the games go on, I don’t know whether I’m ready for that step up.”

Ciara Bracken is looking forward to the week ahead. “The five days are going to be a learning process, I’m just looking forward to enjoying it. The girls are extremely motivated, some of them are putting up massive performances in the super league this year and obviously we have Bridget (Herlihy) who is playing pro overseas.”

“Some of the girls on the team I think are good enough to be playing pro so I don’t see why not, and then Orla Reilly is coming back into the squad as a pro as well, so I don’t see why we couldn’t come away with a win,” Ciara concludes.