IF you thought that, Cormac Gallagher, outstanding goalkeeper for Naas, has been between the sticks for the Kildare Champions for an eternity they you might not be too far wrong. The experienced net minder has been the Naas No 1 since he was a 17 year old, back in 2009. 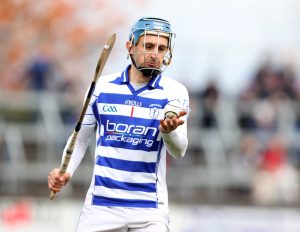 “When you think about it it’s gone fairly quickly, you don’t think you’ve been playing that long,” the man they call “Gally” told the Kildare Nationalist this week. “One year rolls into the next and you just keep going, but it’s only when someone asks you, that you realise that it’s a while.”

While Naas are enjoying an oasis of success at the moment Cormac Gallagher is perfectly placed to remember when success was far from the door of the county town team.

“If there was relegation back then when we were slogging it, we probably would have been relegated. We got the odd win, when we did win a championship game, we nearly celebrated like we’d won the thing it was that big. A few lads are still going there, they’d probably say the same thing. It definitely makes it easier when you’re winning. You’d still play even if you’re not getting the results but yeah it was a slog,” the longserving goalkeeper tells us.

That “slog” makes it all the more sweeter now, though. “When you see both sides of it, some younger lads coming up now, they’ve won all their underage stuff and now winning with the seniors as well. It’s probably a bit different for them, it does make it better when you’re taking hidings off teams and then you can eventually put it the other way around and beat them after so many years of them beating you. It definitely does make it better, all the training and hard work that you put in has the rewards then at the end of it,” Gally explains.

2019 was a pivotal year for Naas. “That just gave a bit of belief to the lads that we can do this. After losing two county finals you’re feeling, God will we ever get there. That kind of gave us a bit of belief after winning Kildare, and then when we had Leinster that year and we won our first game. You think then maybe we can push this on a bit but we were beaten and you realisewe still have a good bit to go. But that win in 2019 was massive, the whole club even, lads that had come and gone over those 16/17 years, I think it just gave a lot of us that bit of belief that we can push this thing on,” he adds.

Cormac Gallagher and his Naas teammates are now looking forward at a tilt at defending Leinster champions, Ballyhale Shamrocks, in Croke Park. “It not a case that we were just put up (to Leinster senior), we’ve earned the chance to get it by winning the (Intermediate) All Ireland, so it’s case of we have to take this chance.”

“There’s no point going through the slog of all last year to not turn up against Ballyhale. Thankfully it came together for us two weeks ago. We were delighted with the performance and getting the win. It kind of justifies putting Kildare up into the senior ranks getting that one win, but we don’t want to stop at that, when you get a chance you have to take it when it’s given to you,” the goalkeeper says confidently.

Gallagher was happy with the performance against Offaly Champions, Shinrone.

“I think our attitude on the day was spot on,” he says. “A lot of the time that’s massive for us, if we come with the right attitude and work rate, everything will flow after that. Maybe they mightn’t have fully peaked, or they weren’t at their best, but for certain parts I don’t think let them play; anything that they did try we were able to shut it down. They did come back at us in the second half,

and we were able to push on again. You’re not going to get any easy game especially coming into senior Leinster. Delighted just to get the win and the performance,” he continued.

“We’re very excited to give it a go, and when the 60 minutes or whatever are up, we’ll know straight away after that where we are in the rankings in senior hurling in Leinster, that’ll give us a good barometer of where we’re at,” he believes.

Cormac Gallagher doesn’t see an issue of keeping the players grounded in advance of Sunday’s semi final. “Tom and Christy are quite good at doing that.

“ A lot of the lads have played in big games before, Leinster, All Ireland, Christy Ring Finals, Colleges. Each individual has their own way of dealing with big games. I think the management are good at bringing us back down to earth and just take it as another match, at the end of that day that’s all it is, it’s a hurling match, whether you win or lose, life is going to go on, you’ll have to go to work the next day. You can’t get too high or too low,” the goalkeeper adds.

Concluding Cormac Gallagher had this to say, “ When you’ve faced up against the likes of TJ Reid, Colin Fennelly, and these lads, you’ll know straight away where you are and where your game is, where you are as a team once you’ve played them. Personally, I’m just excited to go toe-to-toe and put it up to them as best we can for 60/65 minutes. Wherever it takes us at the end of the day, the scoreboard will tell the truth at the end of the day.”

Shamrocks A Team Of Youth And Experience – Michael Fennelly

MICHAEL Fennelly, the now retired Ballyhale Shamrocks clubman, who recently stepped down as Offaly Manager, has a remarkable record club and intercounty titles and he captained his club to Leinster and All Ireland club titles in 2019.

While not having directly faced Naas as a player himself, Fennelly would be “familiar enough” with a lot of the players through the Christy Ring with Offaly and some challenge matches.

“We’re fairly acutely aware of Naas’ success over the last couple of years. They’ve followed on through each year and have progressed into the senior side of things in the All-Ireland set up in terms of Leinster,” he says. “They’re a good team, strong team, big team so a big challenge I’d say, for our fellas and we’ll need to be top of our game to beat them,” the three time All Star says.

The agonising injury time defeat to Ballygunner in last year’s All Ireland club final is a factor for Shamrocks in 2022. “Yeah I think that’s in the background, I think there’s a fire there and it’s burning to be honest,” Fennelly says. “I remember last year we barely got through a lot of games, at times not playing well, in some cases teams where we should have beat them, where we were the lucky ones that got through. The lads look tired.”

“This year they look a bit different, they look like they’ve more energy, a few of them were away during the summer and just kind of came back collectively and hit the ground running, very fortunate with injuries as well, we haven’t picked up too many injuries which is always a good thing obviously, and hopefully put in a good performance on Sunday.”

To prove Fennelly’s point, Ballyhale won their county final with 14 men while their talisman, TJ Reid was missing for the Leinster quarter final victory over Castletown Geoghegan.

The former All Star sees a good balance between youth and experience in the 2022 Shamrocks team.

“We’ve the likes of Joey (Holden), Colin (Fennelly) and TJ (Reid), now the spine of the team. There’s a lot of really good hurlers, the likes of Darren Corcoran, Darren Mullin is back from injury as well, good young fellas, all county material. Young Shorthall is only 18 years; he came on the last day and got a cracker of a point, a point you wouldn’t see an 18 year old score too often.

What might make the difference on Sunday, we asked? “I think high level intensity and just used to that level, not saying the Naas lads are not used to it, they’re very talented, very fit, the size of Croke Park will suit them lads too, I suppose having a number of players who’ve played at Croke Park, at both inter county and club level, you’d be hoping that might help our lads maybe, trying to create one on one as much as possible.”