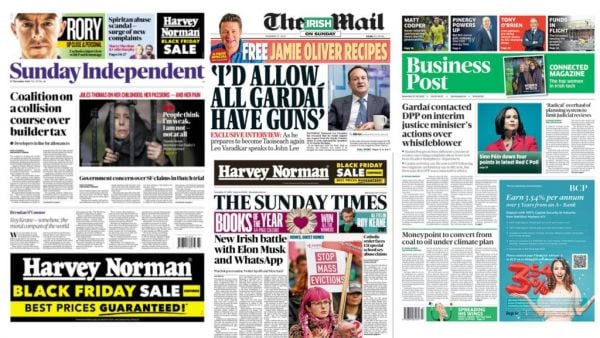 The Sunday Independent reports that the Coalition is on a collision course over possible tax breaks for developers to accelerate the delivery of housing and address the homelessness crisis. 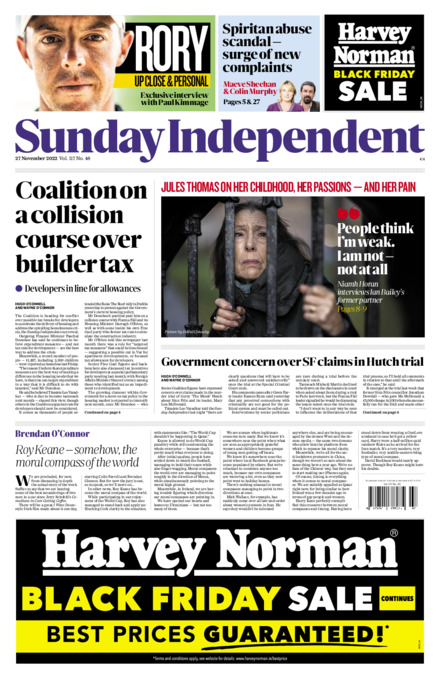 Gardaí contacted the Director of Public Prosecutions about Heather Humphreys’ handling of a complaint from a prison services whistleblower, according to the Business Post. 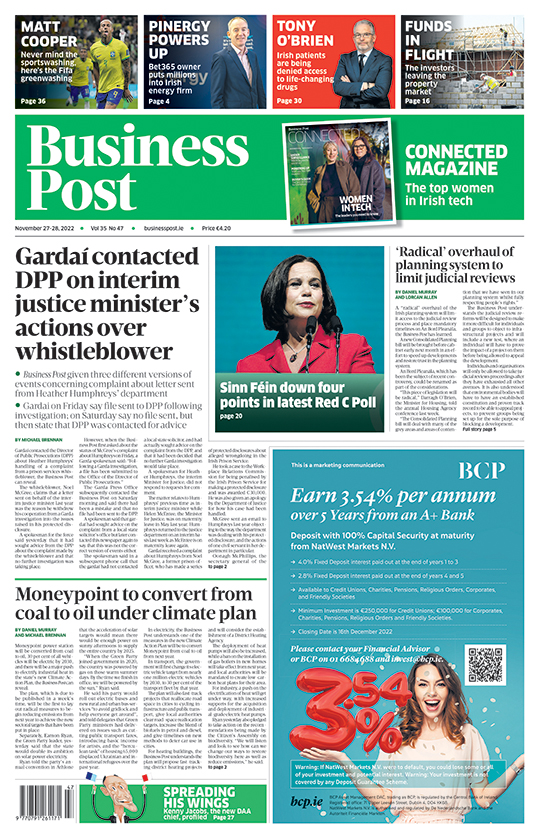 The Irish edition of The Sunday Times says authorities are set for a showdown with two of the biggest tech giants headquartered here, as major inquiries are launched into the conduct of new Twitter owner Elon Musk and a suspected data breach by WhatsApp owner Meta. 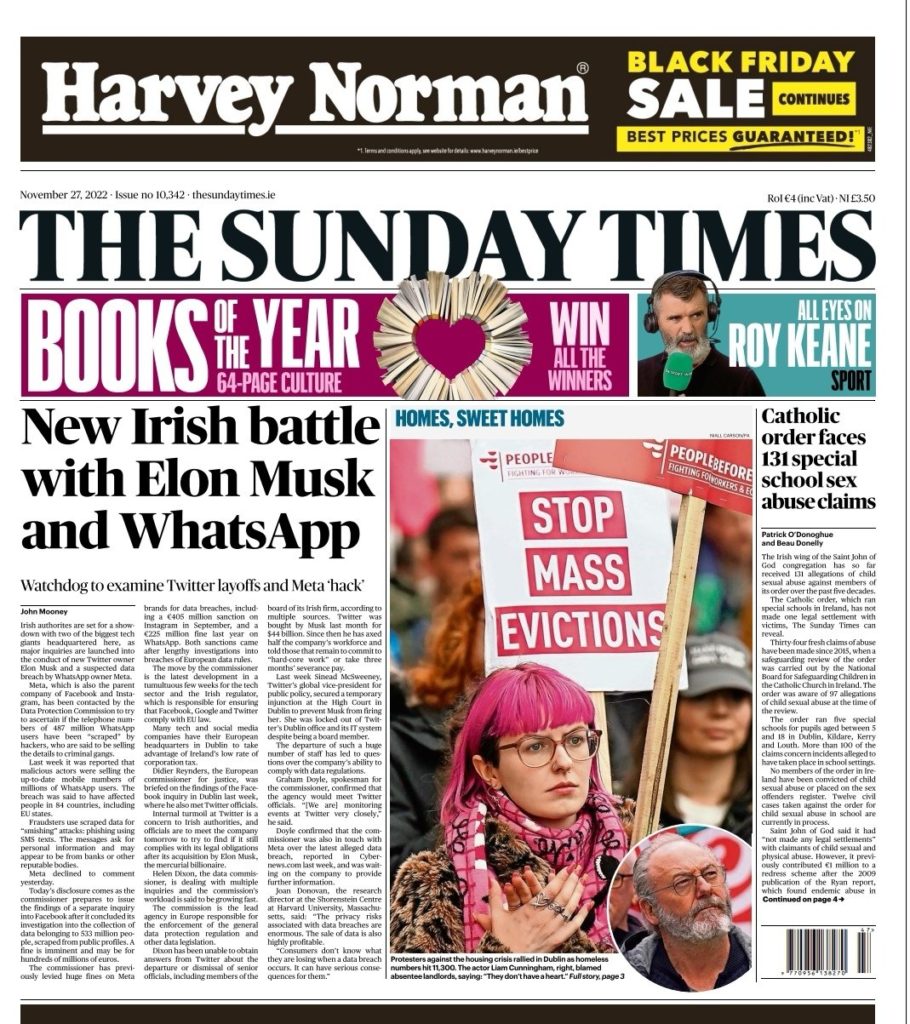 The Irish Sunday Mirror reports that Veronica Guerin’s killer was recently given the go-ahead to design a putting green on a designated plot at low security Shelton Abbey in Co Wicklow. 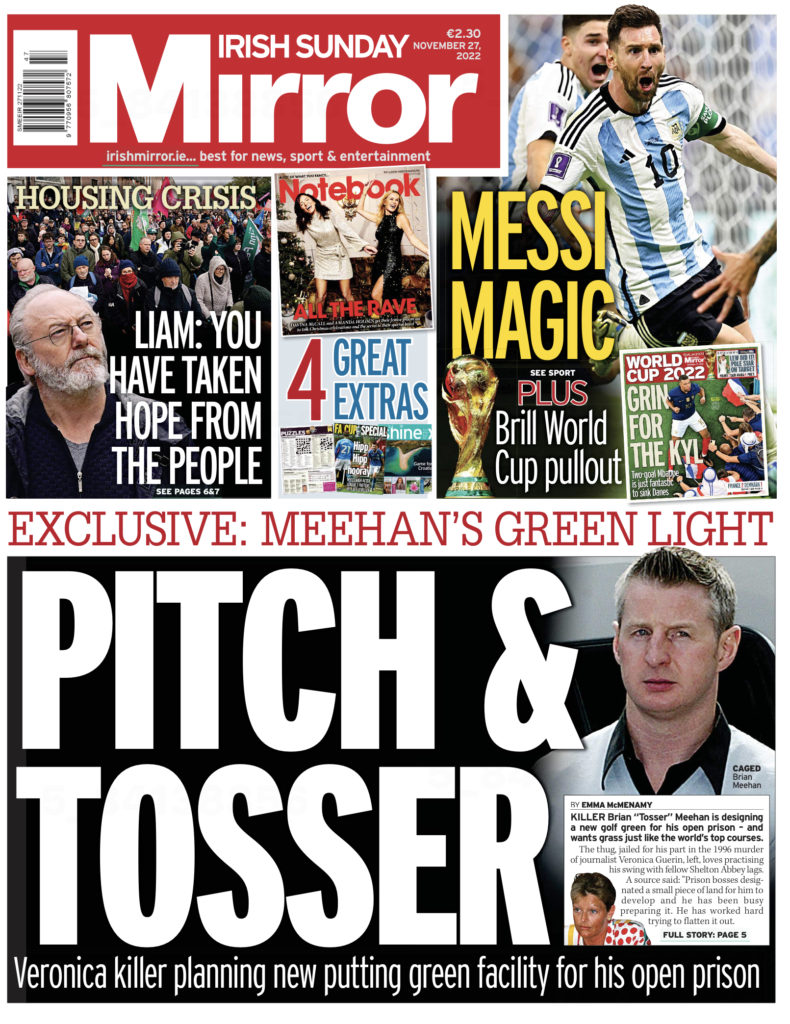 Tánaiste Leo Varadkar speaks to the Irish Mail on Sunday as he prepares to become Taoiseach again before the end of the year. 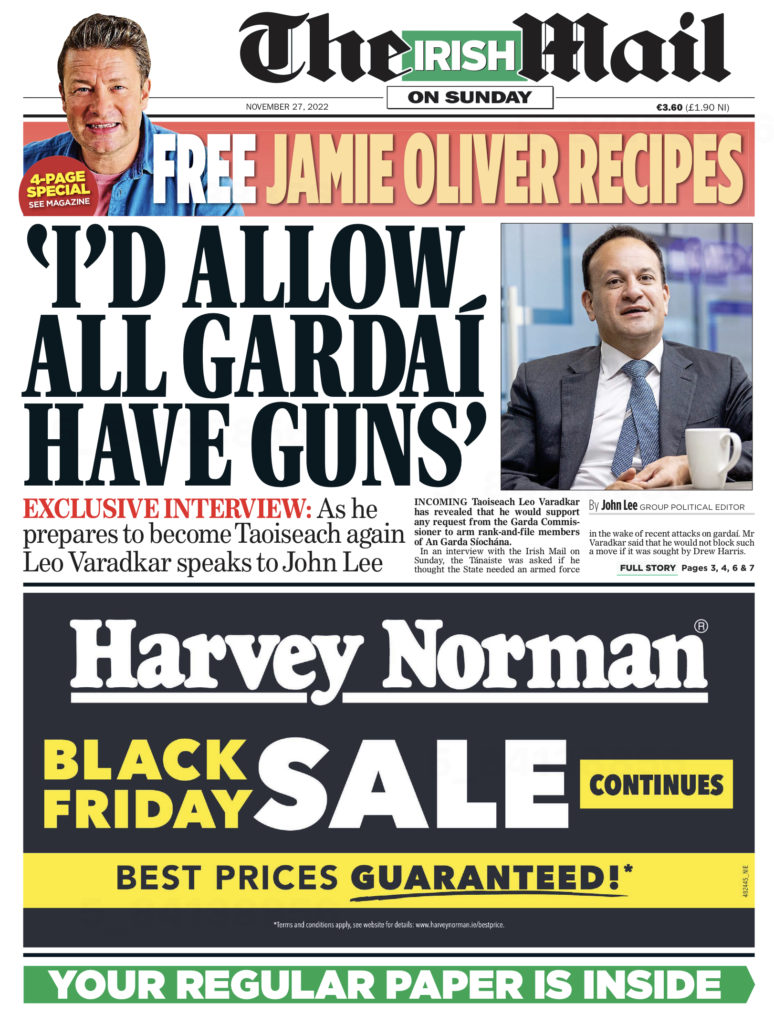 Meanwhile, hungry politicians, “kormageddon” and an unhappy royal are splashed across the British papers.

One of the UK’s top doctors has said the emergency care system is collapsing with some 4,000 patients per day spending more than 12 hours in A and E, reports The Sunday Telegraph.

In a related story, figures obtained by The Independent show people suffering from mental illness are increasingly struggling to access help at every level of the NHS.

The Sunday Times quotes London Fire Brigade’s chief as saying swathes of firefighters face the sack if they are found to have bullied or been racist, misogynistic or homophobic.

The Observer says the first major trade deal signed by Britain post-Brexit has been branded a failure after new figures showed exports to Japan had actually fallen since it came into force.

The British government is considering moving refugees into hundreds of homes set aside for military veterans despite thousands of the latter group being homeless, reports the Sunday Express.

The cost-of-living crisis has not hit the House of Commons, with Daily Star Sunday saying MPs will “stuff” their faces with a five-course Christmas meal at the same price they paid in 2021.

The snouts are in the trough again, folks! 🐽#TomorrowsPapersToday pic.twitter.com/tIP1gZy2W9

Sunday People has Britain facing a “kormageddon” as curry restaurants close in droves due to rocketing operating costs.

Former England footballer Jill Scott is “already a winner” ahead of the I’m A Celebrity final as “offers flood in”, according to the Sunday Mirror.

And The Sun On Sunday says Prince Andrew is “furious” with ministers for denying him his taxpayer-funded police guard.