MU Barnhall RFC entertained Navan RFC in a Division 2A seventh round fixture last Saturday. Following their last-minute heroics vs Ballymena last time out where Conor Lacey scored in the final minute to win 22-21, hopes were high in the camp going into the match. 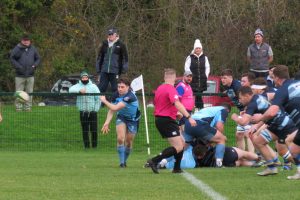 As the teams warmed up for the match, David Dooley, involved with this year’s Irish U20 squad, was injured. The aforementioned Lacey, a prolific try scorer for the Club was brought into the starting line up with Jack Hannon, taking his place in the subs after playing Friday evening vs Trinity in a Metro1 match. The match began in what could be described as a dark drab day with overcast skies with very windy conditions, but at least it was dry.

MU Barnhall started well moving the ball and probing the Navan defence. Navan defended smartly and then put pressure on The Blues with their more direct play by their heavy pack. But the Barnhall pack defended resolutely, repelling the maul, scrum and pick and goes by the Meath men. Navan lost their talismatic number 5 to injury which was a blow to them. Barnhall attacked again and Lacey opened the scoring after 17 minutes with a try. Adam Chester converted to leave the score 7-0. 5 minutes later, MU had a penalty awarded after some ill discipline by the Navan side. Chester again kicked the penalty to lead 10-0. Barnhall’s shape in attack was good but Navan had a purple patch and scored out wide coming up to the break to leave the score 10-5 at the break. At halftime the coaching staff of Adrian Flavin and Darren Hudson spoke to the players and discussed what they needed to do to protect their advantage. From the kick off in the second half, Barnhall held possession and a clever kick ahead by Tim Lambe was gathered by fullback Conor Duggan who scored in the corner to leave the score at 15-5, with Chester’s conversion attempt hitting the post. At this stage of the game, it was Barnhall making all the running with the game played in Navan’s half.  Navan’s ill-discipline kept the Blues in their 22 for long periods but Navan continued to defend well although the referee yellow carded a couple of their players. Chester kicked another penalty in the 60th minute and with ten minutes remaining, Duggan scored another try under the posts to leave the score 25-5. Back to 15 players, Navan scored a try with some direct back play almost immediately to leave the score 25-12. But the Blues were not finished… a quickly tapped penalty by Robbie Holt, and quick hands allowed Duggan to complete his hat trick in the corner. Chester made amends for his only miss of the day to leave the final score 32-12.

To sum up this performance, this was a real team performance, demonstrating to all, that the 20 players played with such cohesiveness in both offence and defence. Next Home match is next Saturday 3 December at the earlier time of 2pm  vs Dolphin RFC in Parsonstown.