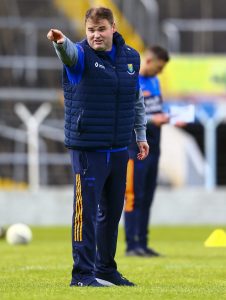 Maynooth had a heavy Kildare influence, with new Roscommon manager Davy Burke adding this title to a growing career haul with county hurler Paul Divilly alongside him and seven local players lining out in the starting fifteen.

Maynooth’s bright start brought early points from the Naas pair Dermot Hanafin and Darragh Kirwan within the opening nine minutes, with UCD, managed by former Galway and Kildare star John Divilly, struggling to make any headway at the other end. Kerry’s Fiachra Clifford finally opened their account with an 18th minute mark.

Hanafin, one of the stars for Maynooth, with a long range followed by a Darragh Walsh pointed a free put Maynooth firmly in the driving seat.

Although UCD pulled it back to 4-2 in the 21st minute with a free from Daire Clegg Paddy McDermott became the third Naas player on target with a smashing long-range point off the outside of the boot.

Ben O’Carroll scored UCD’s first point from play on 28 minutes after a jinking run through the Maynooth defence but with the half entering injury time Sarsfields’ Kieran Dwyer rose high to win a poor defensive clearance, providing Kirwan with the opportunity to hit a rasper that bounced back off the upright before Walsh finished with an accurate drive to the top right hand corner.

Maynooth were full value for their 1-5 to 0-4 half-time lead.

Sarsfields’ Colm Harnett won a free which Kirwan converted from close range early in the second half but that, though, would be Maynooth’s last score for 31 minutes.

Clifford and Jack McKelvey reduced the gap for UCD to three by the 38th minute before we had  a 16-minute spell without a further score.

Harnett earned a black card in the 46th minute and two points just before his return, from a Davy Garland ’45 and a superb right-wing effort from Cathal Feely teed up a grandstand finish.

With four minutes left on the clock and Maynooth back to full complement, Hanafin conceded a free and Garland landed a monster point from his hands to level matters.

Extra time beckoned but a foul on McDermott at midfield four minutes into injury time gave Maynooth possession for one last attack and when Ruairí Kinsella fed Dubliner Darragh Warnock he lofted over a well-taken point from the right to give Maynooth the title.